Since its publication at the end of March 2016 the Global map became literally global, finding its home in schools and Jesuit organisations across all six regions of the Jesuit world. The photos with the Map are a great testimony to this. We’ve created an “Album” in the new “Photos” section entitled The World is our Home – Photos with the Global Map where we collect all the pictures with the map. We hope to keep updating this album, with more photos from around the world.

We’ve created a short video presenting the Global Map Project in the historical context of Jesuit Map making, with the collaboration of Jesuit historian Prof. John O’Malley SJ. Prof. O’Malley highlights the achievements of Jesuit cartographers of the early modern era in Latin America and China and their contribution to Jesuit education of their time. A selection of photos with the Educate Magis Global Map from the six Jesuit regions of the world illustrates the sense of belonging to the Jesuit and Ignatian network of schools. It also emphasises the fact that, in the words of Nadal, “the world is our house”.

The Global Map project is ongoing and we are inviting schools to send any updates to: maps@educatemagis.org We aim to keep improving the map and thus our knowledge of one another as a global network.

The Printed Global Map of Jesuit Schools features in diverse contexts and is being used in different ways around the word.

As a colourful background for happy students: As a conversation starter for teachers from different parts of the world. Each autumn, before the start of school, the Diversity Office at Jesuit High School in Portland host three picnics for various family groups on campus: 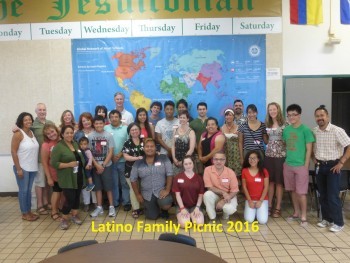 As a worthy addition to a school corridor, where students, teachers and visitors pass frequently. It featured at an event and was fitted on a mobile frame for convenience. At the Workshop on Ignatian School Leadership (WISL) meeting organised by the Jesuit Conference of Asia Pacific (JCAP) in the Philippines (July 2016).

As a background and project “partner” for the Jesuit Schools Network (JSN) Hemispheres project promoting awareness and action about Global Companionship: As a background for and advertising poster for an event: The “small” format map being used as a poster background for the Jesuit Conference of Asia Pacific (JCAP) Colloquium 2016.

This collection of images just shows that we are all on the same Map, belong to the same network, and express this in different ways. Why not show this global interconnectedness by printing and displaying this Map? And when you do, don’t forget to send us a photo to maps@educatemagis.org !

Did you know? You can also integrate the “Online Jesuit Schools Map” into your school website! Find out how here.