During Advent Jesuit Schools in the British Province have contributed Jesse Tree symbols to a tree at Stonyhurst College.  The Jesse Tree is decorated with symbols which tell the story of the ancestry of Jesus. It takes it name from the father of King David. Each school has contributed several decorations.

A shoot shall come out of the stock of Jesse, and a branch shall grow out of his roots.” (Isaiah 11.1)

1.Earth- God looked at all he had created and saw that it is very good.

2.Apple- So God expelled Adam from the Garden of Eden to till the soil from which he had been taken. 3.Rainbow- God tells Noah to build an ark, which God will use to save Noah’s family and members of the animal kingdom.

4.Tower-It was named Babel therefore, because there God confused the language of the whole earth. It was there that God scattered them over the whole face of the earth.

5.Night Sky- Abraham, you will become the father of a great family who will number as many as the stars in the sky and grains of sand in the desert.

6.Ram – There was a ram caught in the bushes. God provided the ram to Abraham for the sacrifice. 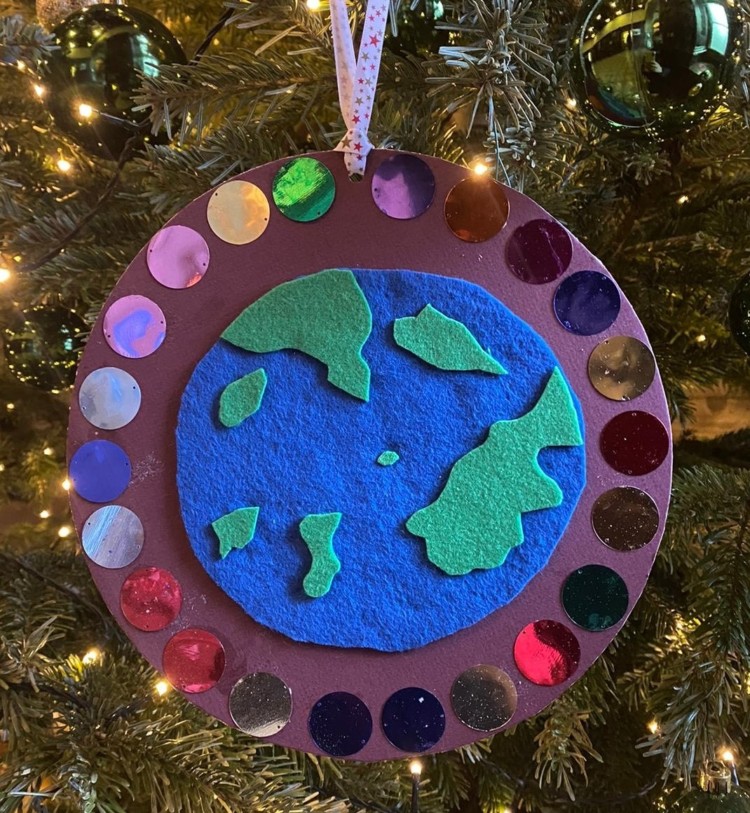 7.Ladder- Jacob sees a ladder going from earth to heaven where angels are roaming up and down patrolling the earth and reporting back to God.

8. Coat- Pharaoh has Joseph brought before him. Joseph hears the dreams and correctly interprets their meaning. Pharaoh appoints Joseph as vizier to carry out the plans.

11.Horns and a Wall- God said to Joshua, “Now I am delivering Jericho and its king into your hands.” 12.Horn and Torch- Gideon then divided the three hundred men into three companies. To each man he gave a horn and an empty pitcher with a torch inside. He said to them, “Watch me and do as I do.”

13.Hair and Scissors- Samson replied, “If my hair were cut then my power would leave me and I should lose my strength and become like any other man.

14. Wheat- Ruth stayed with Naomi. She said, “Where you go, I will go. Where you live, I will live. Your people shall be my people, and your God my God.” 16. Shepherd and sheep- Samuel asked, “Are there any more sons?” Jesse said “Yes, there is David, the youngest, who is keeping the sheep.”

17. Slingshot- David went against Goliath with five stones and his slingshot and his shepherds staff.

18.Scale of Justice- All Israel came to hear of the judgement King Solomon had pronounced, and held the king in awe, recognising that he possessed divine wisdom for dispensing justice.

19. Fire and Altar- Then Elijah prayed to God. Fire fell from the heavens and burnt up the offering and dried up all the water. The people feel on their knees saying, “The Lord is God.” 20.Whale- The word of God came to Jonah a second time. “Arise, go to Nineveh, that great city.”

21. Shell and Water- John declared before them all, “I baptise you with water, but someone is coming, someone who is more powerful than I am, and I am not fit to undo the strap of his sandals.”

22.Tools- “Joseph son of David, do not be afraid to take Mary home as your wife.”

24.Star and Magi – “Where is the infant king of the Jews? We saw his star as it rose and have come to do him homage.”

25. Baby Jesus- “You will find a baby wrapped in swaddling clothes and lying in a manger.”

The tree is displayed at Stonyhurst College for the community to enjoy throughout Advent and Christmas.