In the U.S. and beyond, numerous Jesuit schools joined the Global Climate Strike, some utilizing ISN’s Ignatian Carbon Challenge Climate Strike resources, designed in collaboration with the Jesuit Conference of Canada and U.S.’s Office of Justice and Ecology to assist network members as they pray, act, and advocate for climate change prioritization.

We believe it is important to mark this day, using Ignatian spirituality and pedagogy as the frame for our participation,” shared Brenna Davis, ISN’s Director of Environmental Initiatives.

The call to action of the youth-led climate strikes is particularly relevant for Jesuit institutions in light of the recently promulgated Universal Apostolic Preferences, specifically the preferences that call us to “accompany the young in the creation of a hope-filled future” and “to collaborate in the care of our Common Home.”

Young people continue opening up to the future with the hope of building a life of dignity in a reconciled world that is in harmony with the environment. It is the young who, from their perspective, can help us to understand better the epochal change that we are living and its hope-filled newness.” Fr. General Arturo Sosa SJ. UAPs

Below are some Jesuit schools that participated in the Global Climate Strike. These schools are part of a compiled summary by ISN staff of network institutions who have engaged in this initiative.

Tell us about your school’s involvement in this Global Conversation! Cheverus High School. “Nothing the kids could have learned in school today was as important as putting faith into action with hundreds of other students in southern Maine crying out for universal climate justice and for the health of Maine’s ecosystems.” [Photo courtesy of Cheverus High School] Cristo Rey Jesuit High School. Class spent time with lights off in the classroom, discussing how to better care for the environment as a Cristo Rey Milwaukee community. [Photo courtesy of Colleen Quigley] Gonzaga College High School. “We have been given special dignity and the power of self-awareness to be the conscience and heart of the natural world. The requires living with each other in a reduce, reuse, repair society, instead of a make, take, waste one.” [Photo courtesy of Shannon Berry Sullivan] Saint Peter’s Prep. “We themed our morning prayer around the strike today as well, because we want our students to understand that this isn’t only a scientific or political issue, it’s also a call to put our faith into action” [Photo courtesy of John Dougherty] 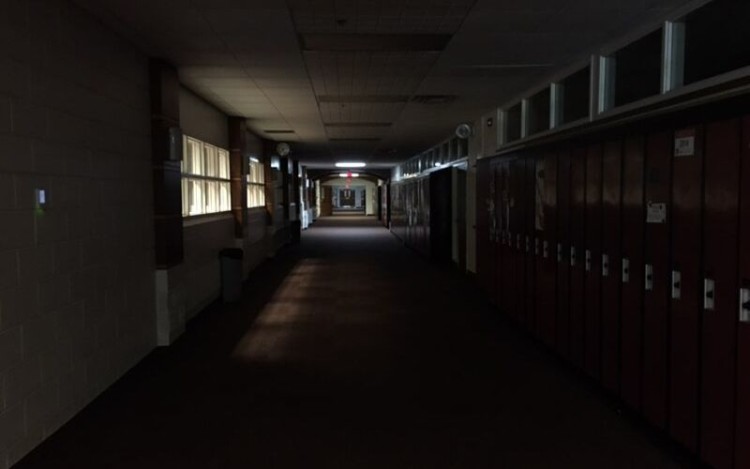 Walsh Jesuit High School. “Our school chose to turn off a majority of lights in the building to catch people’s attention and make known to everyone that even seemingly small actions can help protect our Earth.”