The OFICINA – INA Professional School’s collaboration with La Silla Roja began with simple support in 2016/2017 and was cemented with the participation of La Silla Roja in the 7th edition of the bgreen // ecological film festival. At that time, and after some conversations, the hypothesis of a delegation of Entreculturas to participate in a workshop with foreign and national delegates who participated in the festival came up. The workshop was developed in partnership with Fundação Gonçalo da Silveira and proved to be a success not forgotten by the students. Also within the scope of the festival, we were presented with the visit of the head of the Entreculturas Citizenship Area, Dr. Irene Ortega, who presented one of the prizes to the winners.

In this school year, the school was challenged by the Caldinhas School’s Social Support Office to participate in the “Day of the Poor” summoned by Pope Francis. The educational institutions of the Society of Jesus are aware that education is a privileged mean for the eradication of poverty. This is the context in which another partnership with La Silla Roja appears. As the project joins Education, Social and Human Development, especially with children and young people, alerting the approximately 264 million in the world who do not have schooling, the conditions for another partnership were met.

We explained the activity: each class had a chair. Before painting / decorating, they made a reflection on all this problematic. The class became aware of what there was to be thankful for, such as the possibility of learning. Then, in several reflection dynamics, the students were elucidated how this good learning at all levels is already an aid to social development and can contribute to the reduction of poverty. After reflection, the whole class decorated their chair from a concept and with materials that each student brought.

In the Global Red Chair Catalog read the reflections of the OFICINA – INA Professional School’s students: 15 class, 15 chairs, 15 different focuses on poverty that prevents the school attendance of so many millions of children in the world. 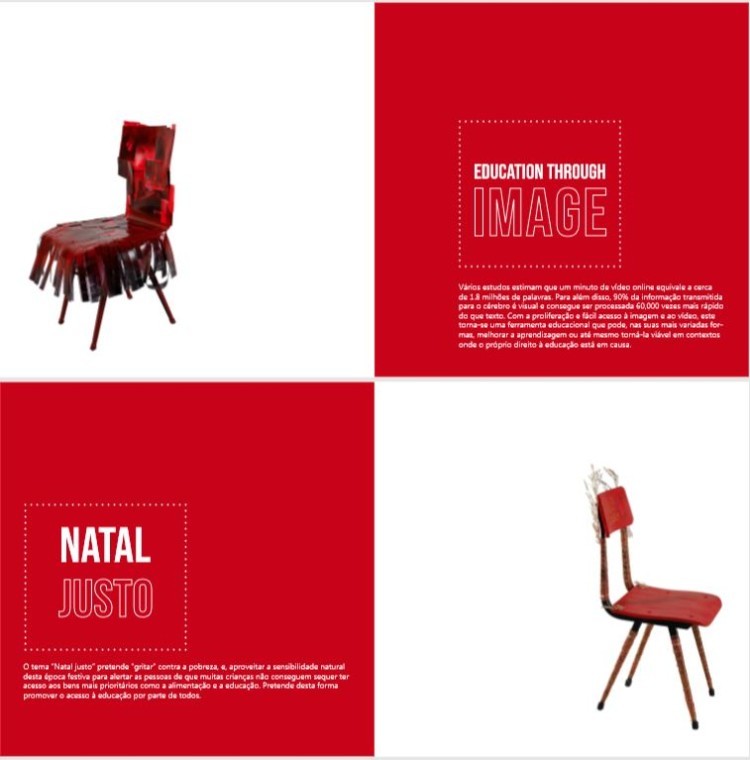