The 2018 Global Map is Here and it Comes with a Fun Challenge!

As the use of the Global Map of Jesuit Schools is growing in Jesuit and Ignatian schools across the world, feedback we receive from the different regions is essential to ensuring our map is as accurate and up-to-date as possible. This year the Global Map has further evolved thanks to this precious feedback. There have been changes to the legend, country borders and country names as well as the annual regional school list updates. 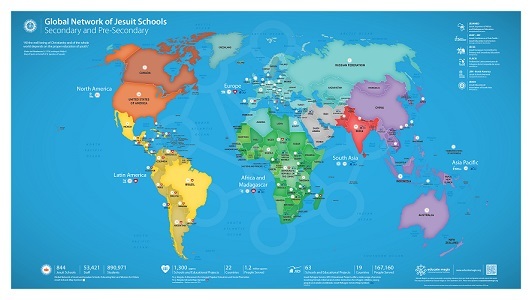 One of the more visible changes was made to country borders.  Dotted and dashed lines were used to clearly show “disputed borders” around the world. We followed the official United Nations (2016) map for these borders and designations.

At the  bottom right corner of the Map, under the Educate Magis logo we explain briefly where the map information comes from. The changes were made by Jesuit regions: South and North Korea (Asia Pacific); “Jammu and Kashmir” (South Asia); Somalia, South and North Sudan (Africa); Middle East – Palestine (Europe).

In terms of overall design the Printable Map largely remained the same. However, small changes have been made to the Legend, for example the JRS and Fe y Alegría Logos were coloured white to match the logos of the regional networks.

We also updated the name of  the JCAP education network to use the full name of “JCAP-JEC” and extra information was added for JESAMED and the Fe y Alegría Network.

There have been a number of changes in the Regional Networks. Three new schools have been added to our map, one in Nigeria (JESAMED), one in the Philippines (JCAP-JEC) and one in Poland (JECSE). Some have changed names, others no longer belong to the regional network. The JRS Schools and Educational project numbers have also been updated to reflect changes in the number of and location of educational services offered to refugees this year. These changes are reported to the Secretariat for Education and published yearly in the ICAJE Statistics Report and then make their way in a visual form to the Map.

Change therefore in the Global Network is a constant. New schools come into being and others move on. Each school has its own fascinating story of foundation, which in most cases is linked to a Jesuit or a Jesuit community.

Which brings us to the global map´s fascinating new challenge.

This year we would like to invite all students from our global network to become “Young Reporters of our Global Network” and take us on a trip through some of the most creative stories of how our Jesuit schools were founded.