How do you communicate and make relevant a five-hundred-year-old story of battles, cannons, and spiritual transformation to a four-year-old child? This was the challenge the Jesuit Institute in the British Province set itself for the Ignatius 500 Jubilee year.

A broad spectrum of learning styles was going to be crucial to meet the diverse needs of key stages spanning across ten years in age. A four-pronged approach was devised: a short play- Life of Dreams written by Jack Murphy, a prop-based storytelling and reflection session led by Maria Neal and follow up classroom activities for after the visit. The interactive play begins with a familiar image of the saint: Ignatius (played by Henry Wyrley-Birch), sitting at his desk writing letters to his companions. As the children enter, he introduces himself and shares his joy at having read their letters. In advance the pupils had been asked to write about their hopes and dreams for the future. Ignatius explains that in his childhood he too had dreams – full of knights, heroes, and the battlefields of Pamplona. Suddenly, the scene is interrupted as Ignatius falls, his sword clattering to the ground. The raucous canon shouts and battle drumming created by the children is shocked into silence. Ignatius is now disabled, his dreams of being a hero dashed. But during his recovery, he hears a voice- the voice of God, and so lays down his sword. He has a new dream- to follow God. He invites the children to “listen with the ear of their heart”, to follow their true dreams as well. The play finishes with Ignatius giving a gift to the children- a story box. They are invited to create a circle and the box is opened. Inside are small objects which are laid out chronologically as the story develops. The play left us in Montserrat, but the story now continues to Manresa. A meditative pouring out of sand captures the development of the Spiritual Exercises as Ignatius opens all his thoughts, ideas and dreams to God. It continues from Jerusalem to Paris, and then to Rome as the Society of Jesus is formed. The Ignatius wooden figure models three outfits as the story unfolds- Knight, Pilgrim and Priest. Hand gestures of blessing, from the storyteller, give a sense that there is an important ‘Other’ present throughout – the Creator, continually working with the creature. Eventually, we reach the death of Ignatius. There is a temptation to omit this with young children but to do so would make Ignatius immortal, like many of their treasured superhero characters. It was crucial to keep him real and human. The story doesn’t stop there however, it continues right to the present day and the work of the Society now, including in their very own school.

After storytelling the children are invited to consider some open questions, often prompting surprising answers:

I wonder what you liked in this story?

“The part I liked best was when he read the books. I like books because you can get lost in a different world like he did.” (aged 7)

I wonder what the most important part of the story is?

“The most important part is the love and care that Ignatuis had in a large family because that must have taught him something about how we love each other and the care he got when he was sick must have shown him what love really is.” (aged 8)

I wonder what allowing God to teach us really means?

“I think letting God teach us feels like warm calmness running through your head like a river.”  (aged 9)

I wonder why IHS is in your school? The children begin to make the link between the story of the Society and their own school.

Each box also has a set of classroom resources including the Audacious Ignatius book, sequencing pictures and a set of Imaginative Contemplations scenes. There is a writing set complete with quill, ink and an IHS wax seal for the pupils to write letters to Jesuits, just like Ignatius. This gift means the story box can be enjoyed over and over, allowing more time for thought, discussion, and reflection on all the events in the life of St Ignatius for a long time to come.

The feedback has been wonderfully positive. Parents have been amazed with their child’s enthusiastic recounting of the story at home, whilst teachers speak highly of the multi-sensory approach and remarked how it has helped them in their own understanding of Ignatius. The collective four-pronged approach has brought Ignatius’ story to life.

Everyone involved was left having gained a saintly friend, who may, perhaps, influence their own dreams to come. 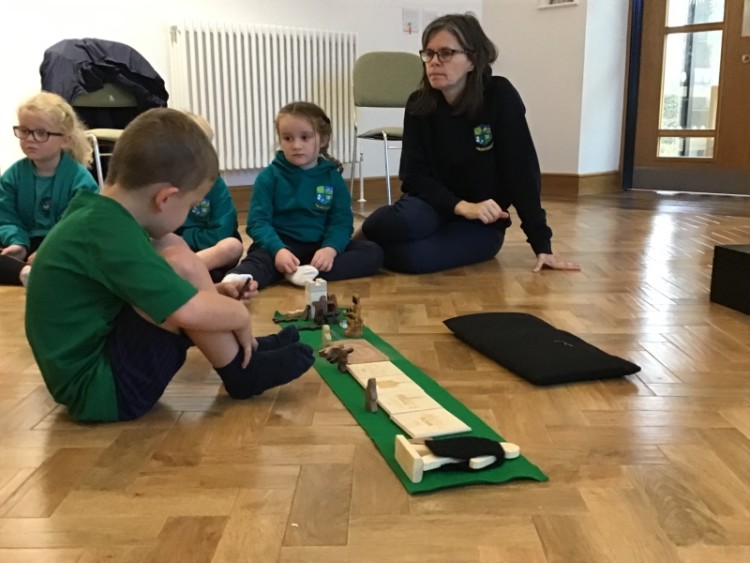