Who Do You Want To Be? A Global School Experience inviting young people to discover a path toward the fullness of life.Participate here
Home / Global Stories / The power of a genuinely global re...

The power of a genuinely global response

By JCAP
Oct 9th, 2015
Share
News from the Networks

Six months have passed since the “Palm Sunday Typhoon”, Maysak, hit Chuuk, Micronesia on March 29, 2015. Life is almost back to normal at Xavier High School.

The initial stabilisation plan provided roofing, food, and water for the campus and for local neighbours, many of whom work at Xavier. Only three class days were lost despite there being no public utility service for two months. Thanks to a sturdy campus generator, there was enough electricity to resume classes from Easter Tuesday. The students helped with the clean up. Under the supervision of their Principal, Mr Martin Carl, they helped campus workers to clear downed trees and debris. A student works to dry books that were damaged in the typhoon.

Fr Thomas Benz SJ, Superior of the Jesuits in Micronesia, recalls that getting the word out was an immediate priority. Together with Fr Robert Pecoraro SJ, Director of Xavier, Fr Benz appealed to the Northeast Province of the Jesuits in the United States and to the Jesuit Conference of Asia Pacific network. Mr Rodney Jacob (Georgetown University ’86), Chair of Xavier’s Board, coordinated a relief shipment through the Ayuda Foundation in Guam and connected the school with a disaster relief consultant, Mr Jerry Facey. Board member Mr Bob Scavullo approached major donors and secured the help of the Federated States of Micronesia Ambassador to the United States, Honourable Asterio Takesy (Xavier ’67), as the honorary chairman of the fundraising effort. The boys’ shower house in August, still being reconstructed.

The response was overwhelming. The estimated cost for building repairs and food relief for Xavier and the neighbouring village of Sapuk was US$211,000. Much of that has been covered by donations. The Jesuits of Japan, the Philippines, Korea, and Cambodia were especially generous, and Jesuit high schools and universities in the US held fundraisers, collected school supplies, and sent hundreds of portable light sources.

Jesuits and colleagues also supported the relief efforts of the wider community. Fr Pecoraro participated in meetings of the Disaster Coordinating Office, which partnered with the International Office of Migration (IOM) in implementing the relief efforts of the US Agency for International Development (USAID). Jesuit Volunteer Mr Jason Wolfe (Loyola University Maryland ’14) assisted IOM in assessing damage on various islands in the Chuuk Lagoon. 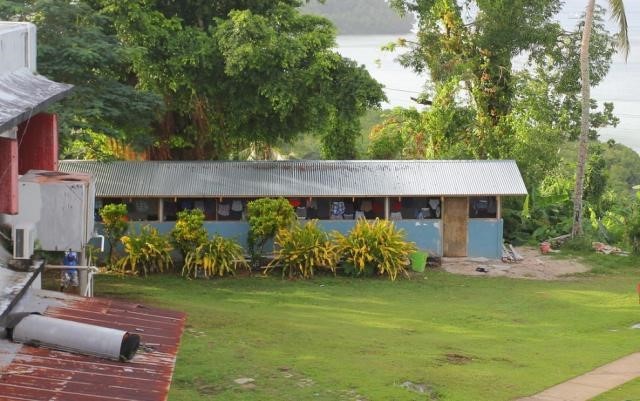 Now, foliage and fruit trees are gradually growing back on Chuuk. The water supply became dangerously low in August, but tanks are beginning to fill again. A lot of the rebuilding and repairs needed at the school have been made, including reconstruction of the boys’ shower house, the facility that had suffered the most damage. The shower house was completed in September, just in time for the new school year.

However, some major projects remain. New windows still have to be installed in a number of the buildings, and structural repairs and additions are needed in the boys’ latrine.

“Memories of Typhoon Maysak are still fresh, but what is abundantly clear is the power of a genuinely global response,” said Fr Benz.

We support and pray for our brothers and sisters in Micronesia as they recover from the damage caused by Maysak.

Photo caption: Repairs being made to the roof of the senior classroom.

The article was originally published on the JCAP website.