Who Do You Want To Be? A Global School Experience inviting young people to discover a path toward the fullness of life.Participate here
Home / Global Stories / Student Leaders Learn to be Open t...

Student Leaders Learn to be Open to Going Beyond Borders

Our language and culture might be different, but what mattered most is the emotional connection we had. This allowed us to be more open to cross our borders.”  Yohana Pegas Syane of Gonzaga College (Jakarta) realized this after participating in the six-day 4th Ignatian Student Leadership Forum (ISLF).

More than 70 student leaders from 19 Jesuit secondary schools in Japan, Taiwan, Macau, Hong Kong, Indonesia, Philippines and Timor-Leste gathered in Tokyo for the forum.  It was storming when they arrived on August 8, accompanied by their teachers, but by the time they reached the Sophia University Junior College Hadano campus on the outskirts of Tokyo, a full rainbow blazed in the sky to welcome them. Fr Sali Augustine SJ, Sophia School Corporation Trustee for General Affairs, welcomed the delegates and presided at the opening Mass.  It did not take long for the delegates to bond and make friends, especially with the sports activities the next day.

ISLF began six years ago when five schools in Asia Pacific decided to hold a gathering of student leaders together.  They wanted to offer student leaders a chance to get to know their peers in other Jesuit schools and learn from each other about Ignatian leadership in their contexts and experiences.  The first ISLF was hosted by Xavier School in Manila.

This year’s theme, “Beyond the Border”, challenged the student leaders to go beyond their own cultures and comfort zones as they discussed world issues such as migration, war and ecology.  They also had an opportunity for immersion. Scholastic Naoki Ochi SJ, who conceived the theme, explained that he opted not to use the verb “cross” because “to cross the border is a grace”.

He also hopes that ISLF will help to “promote inter-province events more and more because differences of provinces are not boundaries”. Indeed, this is what many participants realized.

I grew up in a country where it is so easy to create a lot of borders. But this is not helpful for my country and for the world,” said Ruka Matsumoto of Sophia Fukuoka (Japan). “I’ve realized that I can begin to change this perspective if I change my own perspective first.“

Jules Malhabour of Ateneo de Iloilo (Philippines) said that the most significant lesson he learnt is that people create their own borders. “We are the ones who create our own ‘borders’ and therefore, only we have the ability to erase them. The ISLF experience truly opened both my eyes, and my heart.”

For Danielle Francine Reyes, also from Ateneo de Iloilo, the ISLF was “a bridge among these differences, [that] built strong friendships among countries and brought us fruitful experiences”.

Aprilia de Jesus of Colégio de Santo Inácio de Loiola (Timor-Leste) agrees.  “Our differences in cultures and languages do not separate us because we are united as sons and daughters of St Ignatius”. 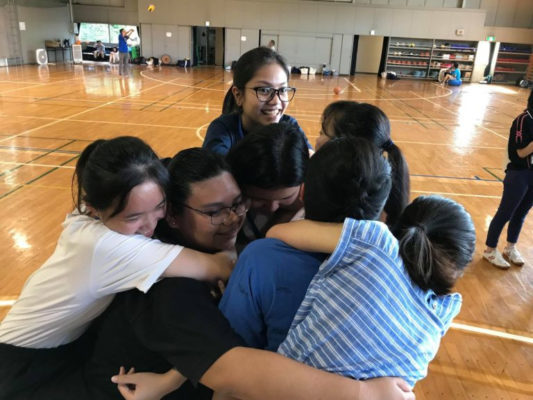 The forum was also a rewarding experience for the teachers and organising team.

Wah Yan College (Hong Kong) teacher Kei Fung Vic Chan was pleased to see how the students grew as they were given the flexibility to discover what they could do and to explore their personal growth. In the classroom, teachers at times focus on strategies rather than the person of the students. This is in itself a border that divides. With ISLF I saw how the students learnt more deeply than what is taught in the classroom,” she said.

Muyako Sakura of the Jesuit Education Center office helped to organise the event, and was happy to see the students gradually open up their eyes and hearts to issues of migrants, wars, and ecology.

For Yoshitoshi Kado, a volunteer from Tokyo University, the forum was an “unforgettable memory”. It was the first time in my life to talk about faith in the Lord with teenagers from other countries and it was very stimulating,” he said.

At the end of the forum, Scholastic Kotaro Mori SJ, who headed the organizing committee, likened the ISLF experience to that of the disciples on their way to Emmaus (Luke 24:13-35). They all felt a burning in their hearts, a common flame that will hopefully inspire them to go out into the world beyond their borders.