Who Do You Want To Be? A Global School Experience inviting young people to discover a path toward the fullness of life.Participate here
Home / Global Stories / SLUH Band Spontaneously Plays For ...

SLUH Band Spontaneously Plays For and Meets with Pope Francis

Forty-five students from SLUH’s band and orchestra, along with 12 adult chaperones, went to Italy for a musical tour March 9-16, 2018 in commemoration of the school’s Bicentennial year. While playing in St. Peter’s Square in the Vatican on March 14, they caught the attention of Pope Francis, who listened to their performance and greeted them afterward.

According to Jeff Pottinger, SLUH’s band director, “The boys could hardly play they were so surprised. Words cannot express the power and impact of our spontaneous meeting. You could truly sense the Holy Spirit in the moment and Pope Francis’ humility, generosity and his passion for Our Lord. He was so gracious and present for the boys.” Pottinger adds, “The Pope and I had a short conversation, with him grinning and me saying grazie over and over. I told him about our Jesuit high school and our 200th birthday. He said the boys were great and the music was beautiful, and he asked me to pray for him. Then he shook many of the boys’ hands, a few of whom took selfies with him, and then he rode away in the Popemobile while we played When the Bills Go Marching In.” 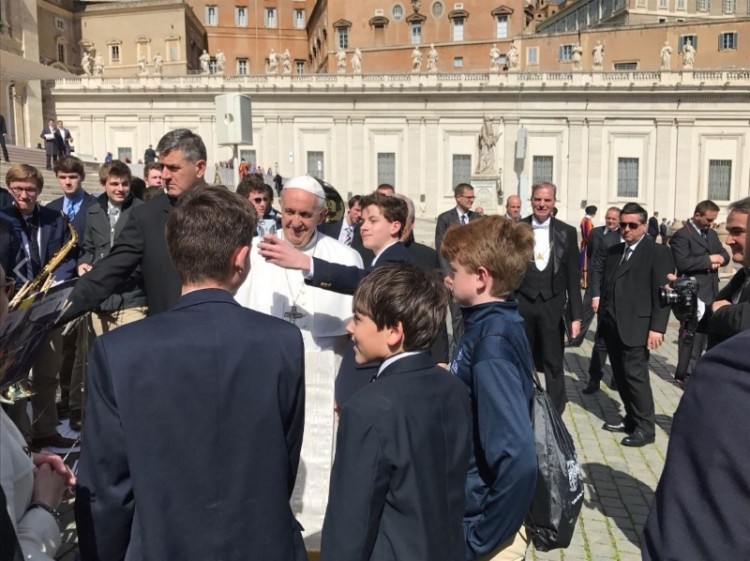 In addition to playing in St. Peter’s Square during the Pope’s Angelus greeting and general audience, the SLUH contingent performed at the square of the Basilica of St. Francis of Assisi and for Mass at St. Peter’s Basilica. They also attended Mass at the Catacombs and Church of the Jesu, and toured the major religious and historical sites of Rome.

Their experience was punctuated by meeting with Greg Burke, a 1978 graduate of SLUH and Director of the Holy See Press Office, at the Vatican. “He shared many wonderful insights and faith-filled, inspiring words about his path from SLUH to TimeMagazine, Fox News and the Vatican,” says Pottinger. “It was an exceptional conversation and very generous of him to meet with us and answer questions from our students. He is truly a man for others.”

In November 1818, SLUH humbly began as a Latin school for boys in a one-story house on the riverfront. Nearly 200 years later, the oldest high school west of the Mississippi River remains committed to the City of St. Louis, proudly celebrating its Bicentennial with a variety of events and activities through the end of 2018.

Source: Re-published from the website of St. Louis University High