By Agnieszka Baran
Feb 21st, 2022
Share
News from the Networks

Although the pandemic continues to limit our ability to travel freely and to meet face to face we, in the JECSE community, have made valiant attempts to stay in touch and ‘accompany’ one other. A number of virtual meetings took place recently which allowed us to meet and engage around themes central to the mission of Jesuit education.

On January 27th Mission & Identity Formators and Pastoral Coordinators in our Primary and Secondary Schools met during the Pastoral Webinar.  The theme of our meeting was that of ‘’accompaniment’’, of walking with our colleagues as we accompany them in their professional lives. Using the biblical image of Jesus sending the disciples out ahead of him as he went about his mission the webinar explored  the reality of how we walk with our colleagues ‘from and into the heart of our Ignatian tradition”.

Mission & Identity Formators and Pastoral Coordinators are the people charged with the special responsibility for formation in our schools and they are called on a daily basis to accompany staff and students in their spiritual growth. Their unique role in schools is to invite and then accompany others on their way “from” and “into” the heart of the Ignatian tradition. By deciding to accompany other people in their spiritual development they have to build a special relationship that requires a lot of sensitivity and care. The quality of this relationship depends on their own formation and on listening to the voice of the One who guides all of us.

To set the right atmosphere for the meeting, Elisabeth Clarke (Director of Ethos at Clongowes Wood College in Ireland) led us in a beautiful prayer. This was followed by two profound inputs on the nature of accompaniment by two very experienced educationalists from our Jesuit schools, Fr Carlos Carneiro SJ and Dr. John Stoer. Fr Carlos Carneiro is a Jesuit priest from Portugal and he has dedicated many years to work at the university and in the youth ministry. He is well known as a great formator and speaker. Currently he is the Director of Colégio das Caldinhas. As he could not be with us in person for health reasons, his speech was read for us by friends from Spain: Marta Valdor, Jokiñe Miranda and Miguel Poza.

Our second keynote speaker was Dr John Stoer. John was the first lay Head of the Jesuit school in Glasgow, St Aloysius College, and prior to that he was Head of St Joseph’s College, a Christian Brother school. He is a religious education teacher and on his retirement he did a doctorate linking Catholic theology and Catholic religious’ education. John is currently the Delegate for the British Province.

The most important part of the webinar was the meeting in small groups. Using the format and the dynamic of the ‘spiritual conversation’ we shared our reflections and responses to what we had heard. Despite the fact that people met in virtual groups it was clear that the participants had been touched by what they had heard and they really enjoyed meeting with one another again. The quality of the conversations in the small groups was evident from the feedback during the plenary session.

Towards the end of the meeting we turned out attention to some matters of business:

a) We talked, firstly, about a new online formation programme on Ignatian Spirituality.  This joint initiative of Educate Magis and JECSE has already been piloted with two groups and it has proved to be a great success with both. Elisabeth Clark and Gellert Merza briefly explained the idea and framework of the “Four Key Practices in Ignatian Spirituality” course. This course is available on-line and we strongly recommended it to everyone involved in staff formation! 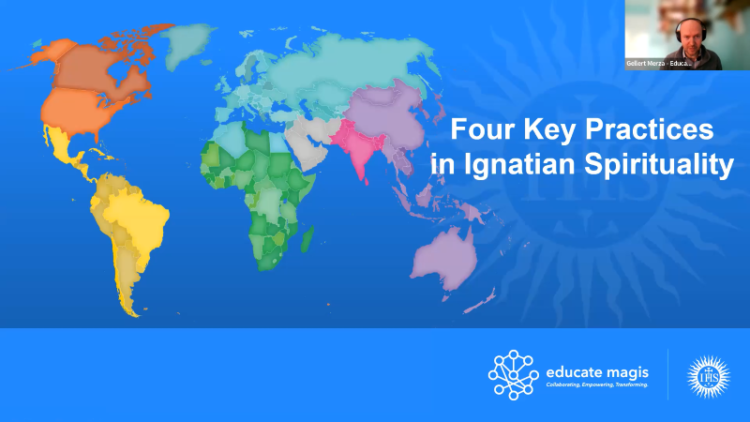 b) Brian Flannery talked about the idea of creating a Learning Community around Mission & Identity and he invited participants to express their interest in the Evaluation Forms.  We are delighted to report that there was an excellent response to this proposal and we in JECSE will follow-up on this in the coming months. If anyone else would like to join our learning community – please feel free to contact us. The webinar concluded with excited waves and smiles and a clear desire to meet as soon as possible… in person.

We would very much like to thank everybody involved in this wonderful meeting, for accompanying each other in the exploration of our Ignatian mission and for sharing your reflections on the theme after the meeting. Some of the comments afterwards included the following:

I think that what struck me most is the emphasis on accompanying others, students and colleagues, on their journey more than the long lists of tasks we have to accomplish. The importance of doing this as a community. Another important point was that as educators we have to help our students become transformative people who are “hopefilled” keeping THE person of Jesus at the centre.”

Deep gratitude to be part of this enriching network and to be truly accompanied and supported, which in turn inspires to accompany students and colleagues on their life & faith journeys.”

2. The IPP Webinar – Learning by Refraction

Another important online event took place on February 8th. It was a webinar on the “IPP – Learning by Refraction (LBR)”. This meeting was organized by JECSE and was facilitated by Ms Rita Atienza. Rita is an educator from the Philippines, a co-author of the ‘Learning by Refraction’ workbook and a well-known trainer in Ignatian Pedagogy (She and Fr Jonny Go work closely with one another). The LBR approach aims to purposefully design Ignatian pedagogy for the 21st century and, in line with best current educational practice, shifts the emphasis from teachers teaching to the quality of student learning. In making the student the centre and primary agent of learning it resonates precisely with the dynamic of the Exercises and the principles of the Ignatian tradition in education. It touches all the cognitive, affective and meaning-making dimensions of a young person’s learning. The webinar was organized as a part of the JECSE IPP-LBR ‘’Train the Trainers programme’’, which we started last year in Barcelona. The general aim of the programme is to equip educators to be leaders of learning in their own schools and provinces. Our hope is to form a community of practitioners who are both expert in the IPP-LBR and skilled in teacher training. Having a group of such teachers across the provinces of Europe would allow for on-going conversations about Jesuit education, mutual collaboration on specific training projects and the continuous sharing of best practice.  Jesuit education has something special to offer and we wish to ensure that it continues. The next stage of the programme will take place in October 2022. The webinar was seen by the planning Team as a way of maintaining momentum between the sessions and engaging with the participants, in regard to their hopes and expectations for this final and critical session.

Judging by the Webinar there has been no decline in enthusiasm and participants are keen to gather again to complete the programme.

If there are teachers in your schools interested in joining this ‘learning community’ – i.e. becoming ‘expert’ in the IPP-LBR and going on to be a teacher-trainer –  please indicate your interest by writing to JECSE: jecse.director@gmail.com