Who Do You Want To Be? A Global School Experience inviting young people to discover a path toward the fullness of life.Participate here
Home / Global Stories / Rare Jesuit maps in Christies auct...

Two exceptionally rare manuscript maps made by the Italian Jesuit missionary to China Matteo Ricci (1552-1610) for the Chinese imperial court, went under the hammer at Christie’s in London yesterday – reports the Jesuits in Britain website.

The maps show the fusion of western and eastern cartography, iconography and mythology.

In 1582 Ricci  established the first permanent Jesuit mission in China in Macao, travelling to Shaoking in Kwantung province the following year. He reached Beijing in 1598. Ricci made eight world maps between 1584 and 1609. He created a Sino-centric world map to impress the Chinese with the Jesuits’ scientific knowledge. Probably the most well-known is his six-panel map printed in Beijing in 1602, of which there are only eight known complete copies. 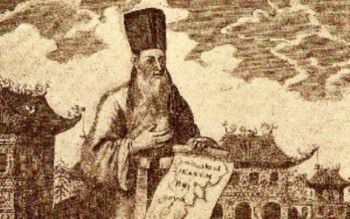 Manuscript copies of this 1602 map were made because production of the printed map was hampered by destruction of the Jesuit house in Beijing in a flood. In light of these difficulties, Ricci started work on a new eight-panel map in 1603, but the Chinese emperor was most impressed by the six panel map, and this set in motion a demand for the six panel format.

Both panels in the Christie’s lot carry the IHS of the Society of Jesus as well as figures of ships, sea creatures and monsters not present on the original printed map, but consistent with other Chinese manuscript copies made during the 17th century.

A remarkable discovery and survival; these panels are only the sixth known extant manuscript copies of Ricci’s map.