Who Do You Want To Be? A Global School Experience inviting young people to discover a path toward the fullness of life.Participate here
Home / Global Stories / Printable Map of Jesuit Schools up...

It’s been almost half a year since the first Printable Map of Jesuit Schools was published on Educate Magis. Since then we’ve published an updated version on 31st March 2016 and received great feedback from the community. We are grateful to those who already sent us updates regarding their schools. Please keep sending us your feedback to maps@educatemagis.org so that we can update and improve both the Printable and Online Map and directory of Jesuit Schools. The Map helps us to improve our knowledge of one another. In his recent blog on International School Exchanges, Dan Carmody of Boston College High School describes this sense of being part of a global network: “There’s a visible sense of pride that they [the students] are part of a bigger picture; that they belong to something, belong somewhere; that is not restricted by boundaries and boarders.” In some way this Map represents this space and strengthens this sense of belonging and of shared mission.

We’ve received some great photos of the global map from schools in different regions around the world, including a giant print from the land of the baobab, Madagascar! Thank you to all who printed the Map and shared their pictures with the community. See below photos of the Maps printed. Let us grow this gallery and strengthen the bonds of this global Jesuit family!

A large map in the Colegio Mayor de San Bartolomé in Colombia. In front of the map are members of the FLACSI team from the Colombian office. From left to right: Lina Marcela, Juan Felipe Carrillo, Hugo Alexis Moreno, Yolanda Bejarano. Each Jesuit school received a printed Map in the Central Africa province of the Society of Jesus. Here is an example from Collège Boboto in Kinshasa, R.D. of Congo. 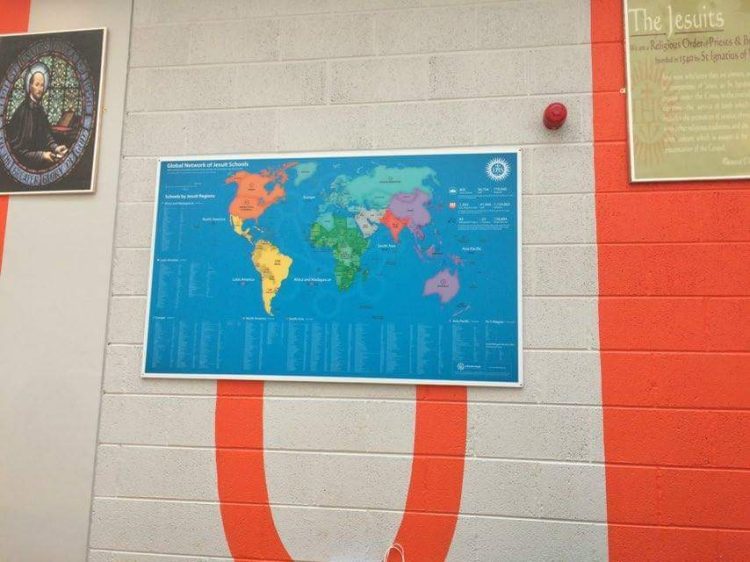 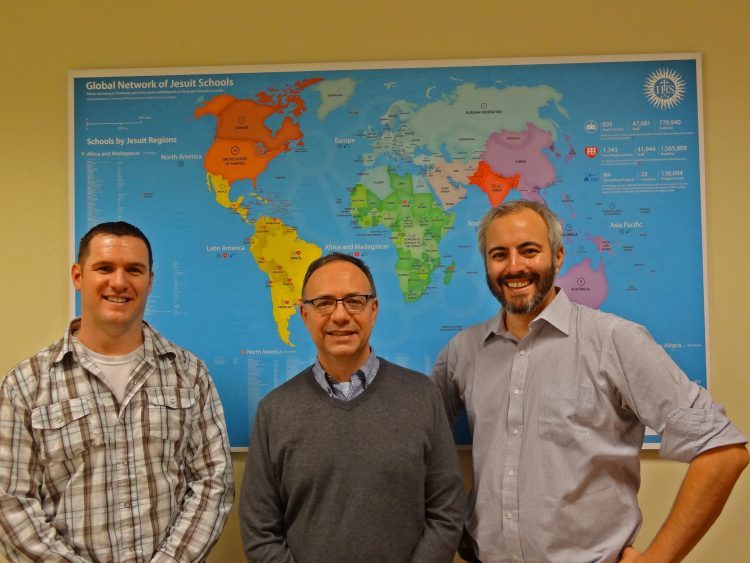 The Team of the Secretariat for Secondary and Pre-secondary Education at the Jesuit Curia in Rome. Dan Carmody, Global Initiatives Assistant for the Secretariat (left), Fr. José A. Mesa S.J., Secretary for Education (middle), Rafael Galaz, Coordinator of JESEDU-Rio2017 Congress (right). At the Core Team Meeting in Dublin (April 2016). From left to right: Gellért, Mark, Ciara, Éamonn, José and Dan

To view and download the maps please click here for English or Spanish or French. And please don’t forget to send us your photo!