Who Do You Want To Be? A Global School Experience inviting young people to discover a path toward the fullness of life.Participate here
Home / Global Stories / Official Foundation of the Jesuit ...

Official Foundation of the Jesuit Global Network of Schools in the Feast of St. John Berchmans

On Friday November 26th, at 17:00 GMT, Fr. General Arturo Sosa SJ officiated a Mass in the Church of Saint Ignatius in Rome, to commemorate the 400th Anniversary of St. John Berchmans’ death with the official foundation of the Jesuit Global Network of Schools – JGNS.
Along with Fr. General Arturo Sosa SJ, Fr. Antoine Kerhuel SJ, Secretary of the Society, and Fr. José Mesa SJ, Secretary for Education, officiated as main celebrants, while a group of more than 30 Jesuits, between Regional Assistants, Counsellors, Secretaries from the General Curia; representatives from JRS-Education and Fe y Alegria, and other Jesuits from the international and Italian Houses in Rome officiated as concelebrants. 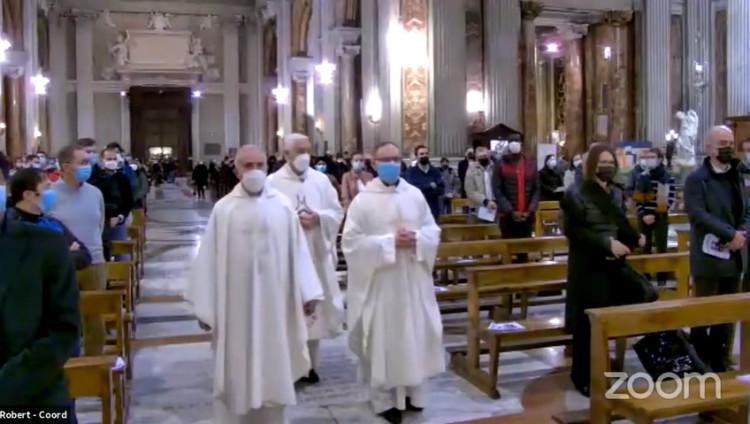 The Ceremony was a global event. Along with the wide group of participants present in the Church St. Ignatius, the Mass was live-streamed worldwide to nearly 150 connection points from where a wide group of partners in the mission had the chance to follow the Ceremony and to walk through its different moments, assisted by a group of collaborators of the JGNS, in charge of sharing the highlights of the Ceremony in English, Spanish and French. Their role was central to make this celebration a multi-lingual and multi-cultural event. One question that may arise is why the Feast of St. John Berchmans was chosen as the date for the official foundation of the JGNS?

During his Homily, Fr. General pointed out that “It is a happy coincidence that the Jesuit Global Network of Schools is being formally inaugurated on Berchmans’ feast day as we celebrate the 400th anniversary of his death. The network desires to be an expression of the commitment of the schools to work as a universal body with a universal mission and so to develop their full apostolic potential”, while recalling that “Since the middle of the 20th century, our schools have progressively developed local and regional networking that has brought immense benefit to our education and has made possible important programs and projects enabling our schools to meet the challenges of quality education today”. Later on, he concluded that the JGNS will have the testimony of leadership of St. John Berchmans as an inspiration for the realization of the Universal Apostolic Preferences, especially his invitation to do the ordinary things of life in an extraordinary way as a reflection of God’s love for us. Fr. General concluded his homily entrusting the JGNS to Our Lady of the Way, so that She can lead it on the path of greater service to the youth of our time. We invite you to read the transcription of Fr. General´s Homily here.

At the end of the Ceremony, celebrants stood in front of St. John Berchmans´s tomb, were Fr. Jose Mesa, Secretary for Education, entrusted the protection of the JGNS – and of each of the networks that make part of it – to St. John Berchmans: Once this significant and vibrant moment concluded, the JGNS was officially founded as the expression of the collective global identity of the Jesuit and Companion secondary and pre-secondary schools committed to the Jesuit mission of justice and reconciliation in our world today. Also as an expression of the commitment to strengthen collaboration, discernment, and networking as part of our contemporary way of proceeding. Since now on, each education network or school that makes part of the JGNS will be able to communicate to the public its membership to a global body that gathers together the identity, efforts and gifts of 2.525 schools, 1.632.796 students, 100.846 educators and 1.958 Jesuits in 78 countries worldwide.

In order to do this, education networks and schools are invited to know more about the JGNS by visiting jesuits.global; to use the Network Logo in accordance to the Logo Use Manual and to continue contributing and nurturing this global effort through Educate Magis.

Thanks to every partner in the mission that participated from the Ceremony and a special message of gratitude to the ones that contributed to make this moment possible in the General Curia, the Secretariat for Education, Educate Magis and other networks belonging to the JGNS.