Joining hands for a healthier planet 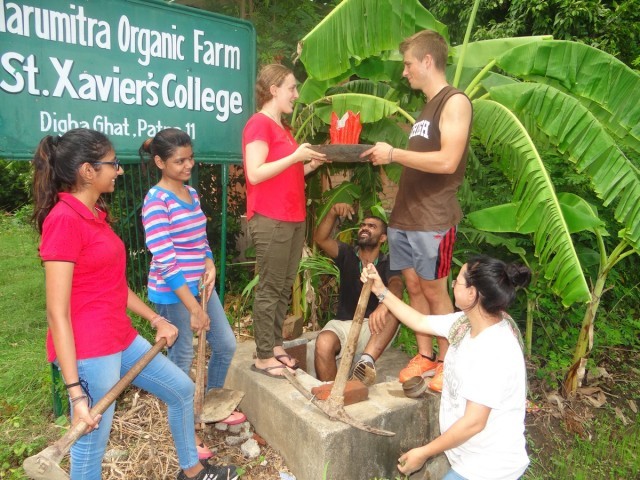 The students  got into the wet slushy muddy field and actually planted rice seedlings excited about the rare chance they got in academic life. The much-awaited monsoon rains added to the celebrative mood of the event. Students, many of them for the first time, learned the art of planting rice using the time tested SRI way.

The program started with a PowerPoint presentation on the preparations that preceded the rice plantation at the Tarumitra organic farm. It may be mentioned that hundreds of students worked hard to supply adequate organic manure for the rice cultivation.  The students also received helpful tips on the right way to plant rice seedlings according to the System of Rice Intensification(SRI) method in the field. After the presentation, the group made their way to the farm for rice transplantation.

Three rare varieties of paddy were sown this year namely, Bauna Mansuri, Kunjunju andKakshan.  For the seventh consecutive year of cultivation, the students resorted again to the well appreciated SRI method for crop.

Noted classical singer, Ranjana Jha brought out a repertoire of traditional ropani  geet“transplantion songs” using a makeshift audio system in the rice field.   Amidst laughter, joy and celebrations, the students too joined Ranjana Jha and sang their heart out. The accompanying teachers and volunteers too walked into the mud to participate in the rice transplantation event. Veteran Organic Farmer trained in Japan, Ms Margaret Molomoo who supervised the entire organic farming said that it was time to make a break from the pesticide laden rice cultivation which is further enervated by the heavily expensive chemical fertilizers. “Poison is flowing out of our farms!” said Ms Molomoo. “If we don’t opt for healthy farms, who else would?” she further asked. It may be mentioned that India resorted to Green Revolution in the sixties banking heavily on chemical fertilizers, ferocious pesticides and seeds from large corporations. It certainly made the country almost self sufficient, except that the deadly combinations of chemical fertilizers and pesticides poisoned the lands, its waters and rivers.

The State of Punjab in Western India who led the Green Revolution ended up in an uncontrollable  Cancer vortex.  Today a train “The Cancer Express” rolls out of Batinda in Punjab to a charitable cancer hospital in Bikaner in Rajasthan on a daily basis.

The high valued pricey Chemical fertilizers and deadly pesticides made the cultivation of staple foods  inordinately expensive. The result was that thousands of farmers committed suicides all over the country when there was a dry spell or a flash flood.  This has necessitated the government to indulge in large scale waiving of agricultural loans in billions. 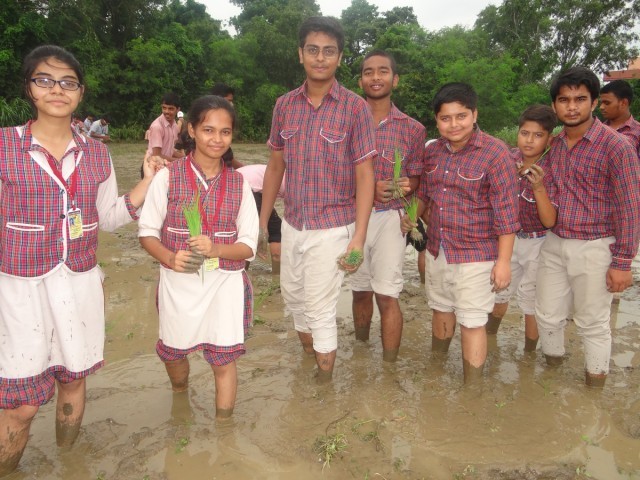 “Tarumitra got into Organic Farming seven years back to bring back health back to the dining table!” said the co-ordinator, Robert Athickal SJ.  “The students felt that they were purchasing diseases when they buy grains and fruits from the market.” added Fr. Robert Being the founders of their green future, the students took deep interest in farming

The concern for the poisoned sustenance food items kept coming back to the helpless students all these years. Tarumitra students felt that urgent action was the need of the hour. “We have successfully completed totally organic farming for rice and lentils last six years. The outcome has energized us to take upon more farming!” said Devopriya Dutta who co-ordinated the event today. Robert Smith who is Tarumitra’s representative at United Nations in New York joined the farming process!

Two American students from Lehigh University, Ms Angie Rizzo and Robert Smith also joined their counter parts in Patna for the entire cultivation work. Angie Rizzo was of the opinion that Organic farming was the right step to sustainable development. She said, “Students are the future of the planet and they should be sensitized about organic cultivation!” Robert Smith said that engaging oneself in farming such as paddy cultivation was being going closer to nature and it showed reverence to Mother Earth. Devopriya Dutta (left) did her home work to pull in resources from all over to get the farm work to go regularly Devorpriya, Arushi, Marie D’Cruz, Akansha, Kalpana and Angie