Go to the page here!
Home / Global Stories / JESUIT STUDENTS COME TO THE AID OF...

JESUIT STUDENTS COME TO THE AID OF FLOOD VICTIMS

Bihar, India, August 12, 2017.  It was around 10.00 p.m. and for all village standards, it was well past the time to be asleep. The peaceful sleep of the people of the District of West Champaran, a district bordering Nepal in the Northern part of Bihar was disturbed by huge a deluge of water, flowing with might and gusto, engulfing everything that came on its way and washing away trees, animals, people, houses, bridges, etc. By the time the inhabitants were able to realise what was happening to their life, the water had risen to alarming heights at various places. The loss of life was considerably reduced since the water level rose slowly after the first gush of water that was furious, powerful and destructive and the loss of property and infrastructure is unfathomable.

Floods are not new to the people of Bihar and it has been a recurring event almost every year during the rainy season. The causes of these could be many, but one of the main causes is the mountainous terrain which borders many districts of Bihar and neighbouring Nepal and heavy rains in these areas that send down much water into the rivers which flow through these districts of Bihar. This time, the floods were unprecedented and even though West Champaran district used to witness some sort of floods every year, it has not witnessed such destructive floods for the last three decades. The continuous torrential rains in Nepal and North India coupled with huge amount of water released from Valmiki Nagar barrage (Indo-Nepal boarder), caused the catchment areas of rivers and canals to overflow and inundate vast tracts of land and destroyed everything. This barrage with a water discharge capacity of 8.5 lakh cusec, released about 6 lakh cusec water, that too without an alarm or warning (as claimed by the local administration) caused these devastating floods.

As per the official estimates, the devastating floods in Bihar have already claimed 514 lives in 19 out of 38 districts in the state that are affected by floods. One of the worst affected district is West Champaran bordering Nepal. The most tragic part was that while people were fast asleep on 12 August, water engulfed them gushing from different sides and through number of paths and with the water level rising to 11 feet. Many bridges were broken cutting off people from the surroundings. This situation continued for almost 4-5 days. The experiences of the people could be fathomed from the words of one of the widows from the Musahar (one of the most backward groups) community. She said, “It was 11.30 midnight. We were fast asleep. Suddenly there was a sort of ‘jal pralaya’ (destruction of the world by water). Myself and children were flown off in the water. We did not know what was happening. In my memory, water had never entered this area. Suddenly we were all floating in 8 ft. water.” The stories and experiences of many of the people of the affected areas are the same. Within a short span of time, many bridges had been destroyed, huge trees uprooted, many huts and ordinary houses destroyed or washed away. Many families had lost all their belongings, including utensils and they were stranded with nothing except the clothes that they were wearing. 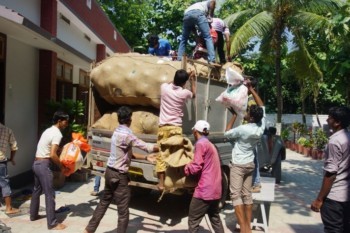 Patna province of the Society of Jesus has five schools in West Champaran district, while three of them are situated in the district headquarters which is not affected by flood, the other two schools are closer to the national border and quite far from the district headquarters and these two schools were totally affected by the floods. Even though, the campuses were inundated, no destruction has taken place within the campus, but the surrounding villages and lands are a sight complete destruction and tragedy. These two schools had above seventy children (from the most backward communities) each in the campus, staying in the hostels and the immediate concern was the safety and care of the children. In both these places, bridges were destroyed and transportation was beyond their imagination. Electricity supply was completely Communication was beyond reach. There was no way of getting across to these schools of ours. The Jesuits in these places with their staff and students began relief operations with whatever was available in the campuses and began to reach out to the people most affected. The Jesuits of the district put in motion a number of activities to bring relief to the affected people. 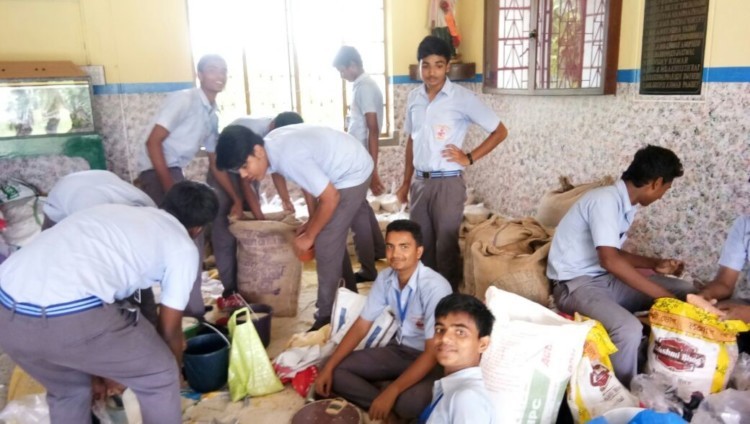 As soon as we were able to establish contact with our Jesuits in these two schools, KREA (Khrist Raja Education Association) which administers all the Jesuit schools in the district in association with READ (Rural Education And Development: the Jesuit Social Action Centre) began planning the relief work which was the need of the hour. The Provincial of Patna Jesuit Province mandated these two institutions to be the nodal agency for all the relief work to be undertaken by the Jesuits. The Jesuits in these institutions decided that they will request the help of all the staff and students of all the Jesuit schools at the district headquarters to generously contribute to the relief programme. The Principals of St. Xavier’s Higher Secondary School, Khrist Raja Senior Secondary School and Khrist Raja Non-Formal school requested the staff and students to join the relief activities and put up notices on the notice boards specifying the items required for the immediate relief to the affected. Children and staff brought items such as rice, pulses, sugar, salt, cooking oil etc. including match box. Some of them even brought the new uniforms that were kept for their own use. They also brought money. These students and staff make packets in their own respective schools for affected families and it is sent to our schools in the affected areas from where it is distributed to the people. It is inspiring to note that the staff and students are fully involved in these activities and they accompany the materials to ensure it reaches the people who are in dire need.

The first part of the relief operations from these school were undertaken by the staff and students of St. Xavier’s Higher Secondary School. They mobilised enough resources for 300 families and three staff members accompanied by student representatives transported the relief materials to St. Xavier’s School, Gaunaha (One of the worst affected areas) and distributed them among the most backward classes. These student representatives shared their experiences with other students and their sharing was inspiration for further mobilisation of resources. One of the students who was part of the delegation said, “I felt that I was in the middle of humanity crying for help and amidst them, I was an angel for them. The people were looking up to me with great expectation. I realised I was only an agent of some divine intervention taking place.”  This sharing further inspired the students and they were able to mobilise further resources for another 200 families. All the works regarding these relief operations including procurement, packing, transportation and distribution are taken care of by the students. The students have already made two visits to Gaunaha for the relief works. Meanwhile, staff and students of Khrist Raja Senior Secondary School mobilised and procured the required relief materials for the families affected near St. Thomas School, Ratanpurwa. Frs. Christopher Kerketta and Sylvester Dung Dung are spearheading these relief operations. They hope to reach out to at least 500 hundred families adjoining the Nepal border. Three teachers from the school accompanied by the Jesuits and students transported the required items and distributed the items among 300 families. They will continue these activities and reach out more needy families in this area.

The relief activities are not in isolation and the Jesuits in these schools are working in close collaboration with government agencies and local administration. The Jesuits schools in the state and institutions administered by other religious groups are also contributing to this task generously. The goal is to reach out to maximum number of families that are in dire need support and assistance. We are noticing post flood trauma and sicknesses among the affected people. The fear of an epidemic is looming large and some incidence of this has already been reported to us and we are leaving no stone untouched to use all our human resources to elicit support and cooperation from all people of good will. In the first phase, we are concentrating on providing immediate food provisions and health services. We are collaborating with other Catholic Religious Congregations, Dioceses, government agencies and agencies involved in disaster relief operations. After completing this first phase, we have decided to begin rehabilitation process by providing education materials to the students affected by flood and then in building of the houses. The Ignatian spirit among our staff and students (majority of them are not even Catholic) has been very inspiring and they are willing and have promised that they will accompany the Jesuits in this noble endeavour. The efforts of the Champaran Jesuits have been inspiring. To me it appeared that the relief operations undertaken is a true expression of solidarity with all the Jesuits, collaborators, staff and students of Champaran actively involved in reaching out to the most vulnerable and needy. With all of us Jesuits, collaborators and our resources and energies put together, it has become a good model of response for the afflicted. A true Ignatian spirit indeed!!!

May God bless our efforts for rebuilding the lives of the afflicted!