Who Do You Want To Be? A Global School Experience inviting young people to discover a path toward the fullness of life.Participate here
Home / Global Stories / Fr General stresses shared mission...

By Jesuit Conference of Asia Pacific
Aug 1st, 2017
Share
News from the Networks

Fr Arturo Sosa SJ has sparked renewed vigour in the Jesuits and their collaborators in Asia Pacific with his first visit as Superior General to Indonesia, Cambodia and Singapore.  In each country, he met with Jesuits and collaborators, learning from them about their context and giving them much food for thought with his reflections on the world today and the response of the Society of Jesus from the 36th General Congregation.  In Singapore, he also joined the Major Superiors of the Jesuit Conference of Asia Pacific in their bi-annual assembly from July 18 to 21.

“Fr General’s visit has had an inspiring impact on the Jesuits and partners he met and on those who followed his travels through the JCAP communication updates,” said JCAP President Fr Mark Raper.  “He is eager to learn about the life of the Society in Asia Pacific, and he had a clear message for us.  Repeatedly he said that we are called to discernment in common and that good decisions come from discernment.” 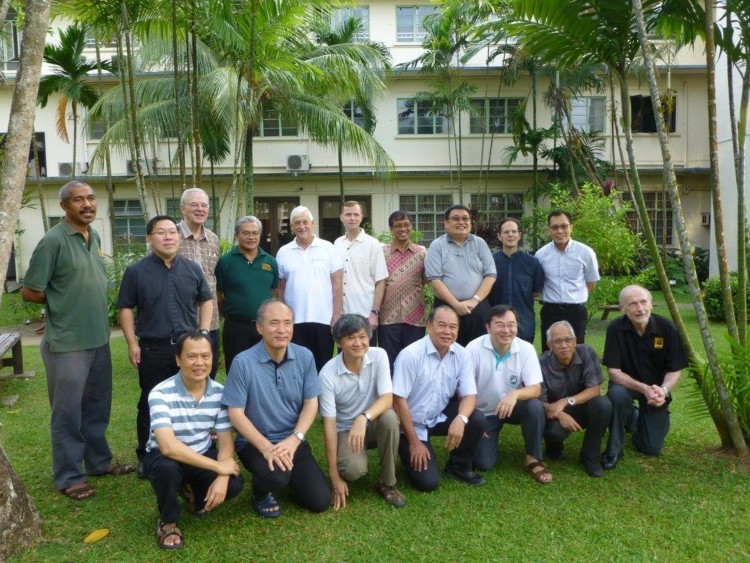 Quoting frequently from GC 36, Fr Sosa said that in responding as people of faith to the “profound state of crisis” the world is in today, we need to first remember as St Ignatius reminds us that God lovingly labours in the world; and then we need to discern how he calls us to share his work as individuals and as groups.  The GC 36 did this and thus felt strongly “the call to share God’s work of reconciliation in our broken world” (GC 36, D1, No 21).

“Reconciliation is at the heart of the mission of the Society of Jesus,” Fr General stressed, adding, “Service of faith takes place in the ministry of reconciliation among human beings, with creation and with God in Christ.”

He also reminded his brothers that for GC 36, life and mission are “deeply interconnected” and can be seen as “two sides of the same coin”.  Closely linked with this is community life, which he described as “a necessity, a gift and a mission”. Jesuits from the Malaysia Singapore Region

Fr Sosa told his brother Jesuits, “As Jesuits, we face the challenge of accepting community as a mission in itself. The community is not born spontaneously because we are registered in the same catalogue or inhabit the same house. Making ourselves truly friends in the Lord, brothers who share a life-mission is a grace and a process that demands a disposition that is personal and constant.”

Indonesian Jesuit Provincial Fr Sunu Hardiyanta was pleased with Fr General’s emphasis on common life.  “We learn from the Venice experience of coming together as friends to discern their mission,” he said. “If the Jesuits today can do this, we will be able to animate the broader community, everyone who serves and who works with us.”

For as Fr General said, “The mission of Jesus Christ does not belong to the Society of Jesus, but to all who feel drawn to this mission, even those who do not know him but embrace his values. The challenges are so great that the time of “single fighters” is over; we can only respond to the great concerns if we are willing to work together.”

To reinforce this point, he told an anecdote about a meeting he had attended of Jesuits and partners in mission where some name tags said “Jesuit” and others “collaborators”. “I joked and asked: ‘Are not the Jesuits also collaborators?’ That was only half a joke,” he stated. “Because all of us are collaborators in Christ’s mission.”

Fr Hardiyanta particularly liked this point.  “In Indonesia, we have experience of doing common discernment including friends in apostolic works. It is not Jesuit work but the work of God and if we can make space to listen to the movement of the spirit, like Pope Francis says, reconciliation is possible, peace is possible,” he shared.

There is evidence of this in the work of the Jesuits in Indonesia, where Fr General met with some Muslim scholars.  After the dialogue, he said, “If people can see us [Muslims and Christians] working together in the service of the human family, especially the poor, then they might see what is deepest in our hearts and what binds us together: our faith in a merciful God who wants, not violence and hatred, but love and peace in our world.”

A few days later, in Cambodia, which is predominantly Buddhist, Fr General engaged in a dialogue with Buddhists and visited a Buddhist temple for the first time.  He shared later that it was “deeply consoling to see how we are united in our desire to promote peace and reconciliation in our world”. Consolation is a gift Fr Christopher Soh, Superior of the Jesuits in Malaysia and Singapore, received from Fr General’s visit.

“Fr General spoke of how Pope Francis had reminded the Society of Jesus at GC 36 to pray for the gift of consolation.  I believe this is the only safeguard against discouragement, which he later called the most powerful weapon of the devil,” Fr Soh shared.  “Perhaps more than anything else, the General’s visit has been for me an experience of the ministry of consolation … of encouragement. For which we are deeply grateful.  In the words of St. Paul, ‘I have indeed received much joy and encouragement from your love, because the hearts of the saints have been refreshed through you, my brother’ (Philemon 1:7).”