Who Do You Want To Be? A Global School Experience inviting young people to discover a path toward the fullness of life.Participate here
Home / Global Stories / Educating to fraternal humanism g... 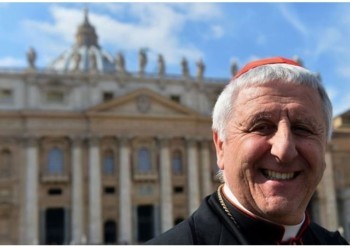 Cardinal Giuseppe Versaldi, Prefect of the Congregation for Catholic Education, presented the document “Educating to fraternal humanism. Building a ‘civilization of love’ 50 years after Populorum progressio” at a press conference on September 22nd (Vatican Radio).

The press conference was held in the Holy See Press Office to present the work of the Pontifical Foundation Gravissimum educationis and the document “Educating to fraternal humanism. Building a ‘civilization of love’ 50 years after Populorum progressio”.

Cardinal Versaldi said it contains the guidelines for education in fraternal humanism (see Spanish version here, see French version here) and that it will be distributed to all 216,000 Catholic schools and universities around the world “with a student population that exceeds 60 million pupils from every faith and ethnic group”. This includes the 845 Jesuit Primary and Secondary schools worldwide.

The document says, “Our efforts at education will be inadequate and ineffectual unless we strive to promote a new way of thinking about human beings, life, society and our relationship with nature”.

“Solidarity and brotherhood,” Cardinal Versaldi said, can be promoted by Catholic schools and universities “through a formative experience capable of integrating science and conscience.”

Msgr. Guy-Réal Thivierge, the Foundations’ secretary general, said its work is to incarnate the educative vision promoted by the Congregation for Catholic Education.

He said the Foundation is inspired primarily by Church teaching and by the charism of Pope Francis.