Who Do You Want To Be? A Global School Experience inviting young people to discover a path toward the fullness of life.Participate here
Home / Global Stories / Creating a Culture of Collaboration

Creating a Culture of Collaboration

By Ilse Dekker
Jan 10th, 2019
Share
News from the Networks

Franck Janin sj, as president of the JCEP, opened the meeting and expressed his sincere gratitude to the Steering Committee for all their work, especially during the interim period when the search for MT Michel’s successor was taking place. He also welcomed Ilse Dekker and thanked her for her generosity and willingness to serve as the new director of JECSE.

Networking; a new way of proceeding

The theme for our meeting was the importance of networking as a new way of proceeding. Ilse introduced the theme encouraging us as a Jesuit network to remain faithful to our holistic, humanistic narrative, while the prevailing paradigm in our world today sees education as ‘training for employability’ and is instilling the values of individualism and competitiveness. Our Jesuit vision, which educates for compassion and solidarity, calls on us to work together as companions. Daniel Villanueva sj, general director of Entreculturas and coordinator of the Jesuit Network Initiative, talked with us about the dynamic of networking, not as an aim in itself, but as a means to create a culture of collaboration and to strengthen our common initiatives. He explained how networking was formally adopted by recent General Congregations as the new way of proceeding for the Society. It was recognized that some problems just cannot be solved alone but require an interconnected approach. And as educators we should always remember that our school communities provide a wonderful opportunity to give students and parents a sense of belonging and a deeper awareness of our interconnectedness. We explored how we might, as a group of delegates from the different Provinces (through JECSE) and of the Education Sector linking with the other Jesuit sectors, expand the possibilities of our networking. To help us move into this dynamic Dani examined the style of leadership this requires, within our communities at all levels; coordinating creative human effort, building on relationships rather than authority, on trust and community interest rather than efficiency.

Finally, we surfaced the strengths and needs in our different Provinces, and we were able to determine a number of areas that we might fruitfully collaborate on. Three specific task groups were formed on the topics of Formation, Global Citizenship, and Safeguarding.

The Safeguarding of children and vulnerable adults in our schools is now one of our main priorities. At the meeting we dedicated special and focused attention to this theme.

Antonio Allende sj, Spanish Education Delegate, gave an overview of the statements from the Society and the Church; he talked about the sins of the past, the history of abuse and the cover-up by Church authorities.  He spoke about how the abuse of power is often the root cause and only by addressing the deeper culture can we prevent the possibility of this recurring. 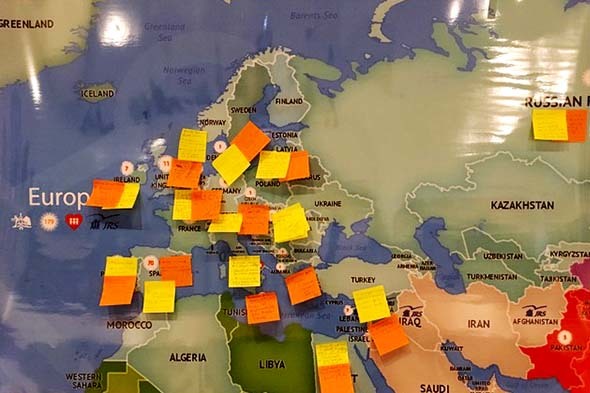 Brian Flannery, Irish Education Delegate, gave a heartfelt account of the Irish experience with all its painful consequences for the victims and their families. He also spoke about the need to see Safeguarding in the larger context of children’s wellbeing and how traditional notions of abuse should be expanded to include concepts of emotional abuse and neglect. These are realities for every school and need to be addressed in a deliberate, regular and consistent manner.

Filipe Martin sj, who guided the process of writing the manual on child-protection for the Portuguese Province, spoke about the importance of their collaborative methodology and mentioned their positive approach: to reinforce good practices and prevent abuse, but not to avoid closeness and affection or by creating a suspicious climate. The Portuguese model was seen as an excellent example of best practice.

Of course within JECSE we will continue to share best practices on ‘interiority in the school context’. In this regard there was a beautiful presentation by Franciso Cuartero sj, pastoral coordinator of the Spanish team, on their ‘Lineas de Fuerza program’, animating essential Ignatian themes over a cycle of 6 years.

Jose Mesa sj, secretary for Jesuit Education, reminded us of the developments over the last 10 years and the work being done since the last worldwide conference in Rio (2017). He also highlighted the wonderful support being given by Fr General and of the need for the regions to rally in support of the worldwide on-line-community, Educate Magis.

In conclusion, it is fair to say that the gathering was a great success. As delegates we left the meeting feeling that there is now a focused and committed leadership in place, a clear of priorities for the future and a number of task groups working on how to progress these and the general mission of the Society.