Who Do You Want To Be? A Global School Experience inviting young people to discover a path toward the fullness of life.Participate here
Home / Global Stories / Celebrating the First Anniversary ...

Celebrating the First Anniversary of JESEDU-Rio2017

The Global Network of Jesuit Schools is celebrating the first anniversary of JESEDU-Rio2017! The first International Congress of Jesuit Education Delegates which took place in Rio De Janeiro, Brazil from the 16th to the 20th of October, 2017.

The Education Delegates are lay people and Jesuits who animate and coordinate the global networking of more than 800 Jesuit schools in 72 countries around the world. During JESEDU-Rio2017 the Delegates carried out a reflection process to define 13 priority actions to be implemented in the schools of our global network, with the objective of “Acting as a universal body with a universal mission” (CG35, D.2 #20)

To celebrate this first anniversary, we want to show you how, one year later, the impact of this meeting is visible in our communities and educational networks.

The results of JESEDU-Rio2017 involve us all; Delegates, management teams, teachers, students and families, because we are all actors in this shared mission. If you want to know more about JESEDU-Rio2017, please visit this section JESEDU-Rio2017. What is happening in the global network of Jesuit and Ignatian schools?

Many things are happening, which should fill us with joy and inspire us. Below are some of the news items and highlights of what has been happening since JESEDU-Rio2017. If you would like to share your news follow this link Actions after JESEDU-Rio2017

Letter from the Secretary of Education to the Education Delegates.-

The Secretary of Education, Fr. José Alberto Mesa, SJ has written a letter to communicate with the Delegates and all the members of the global network of Jesuit and Ignatian schools on the occasion of this first anniversary. In his message, the Secretary of Education expresses his gratitude to the Delegates and to all the educators for the advances that have been reported from all the networks and provinces. In addition, he reminds us of the challenges we must address, once we have celebrated this first anniversary and begin the journey towards the second anniversary.

Read the letter here Commemoration of the First Anniversary of the International Congress of Jesuit Education Delegates, JESEDU-Rio2017.

On the occasion of the celebration of this first anniversary, the Secretariat has released the translation into English, French and Portuguese of the speech which Fr. General gave at San Calixto School in La Paz, Bolivia, (original version in Spanish here) where together with offering an enriching reflection on Jesuit Education, Fr. General spoke about the work carried out at JESEDU-Rio2017:

I would like to finish by giving you what my teachers would give me: homework. […] Here it is: study the thirteen proposals for the next five years. Get to know them and put together a program to make them a reality, so that each institution can do so. Some institutions are most likely alive to some of them, but they can improve and learn from others. This is your assignment, and I will close with a word that summarizes so many things: thanks! Thank you for all your generosity, love, faith and hope! Fr. General´s Address in Colegio San Calixto school in La Paz, Bolivia.

Journey Towards the Second Anniversary.-

The JESEDU cycles of reflection and work are a permanent “pilgrimage” to experiences and learning. These cycles allow us to serve better. In this way, just as we are preparing the journey towards the Second International Colloquium on Jesuit Education JESEDU-Jogja2020, the Secretary of Education has encouraged us so to keep the 13 Actions from the Action Statement in mind at the beginning of this new cycle, placing emphasis on transforming these agreements into action plans for the next 5 years, as Fr. General encouraged us to do in his speech in Bolivia. Share the updates from your region about JESEDU-Rio2017 13 Actions

#1 The Secretariat of the Congress. A group of 5 people; 4 Jesuits and the Executive Director of FLACSI carried out the work of the Congress Secretariat by preparing a daily article to summarise the day in Spanish, French and English.

#2. A Congress which cares for the Environment. The Congress organizing committee compensated for the carbon footprint produced by participants’ air travel by avoiding the use of disposable bottles and cups. 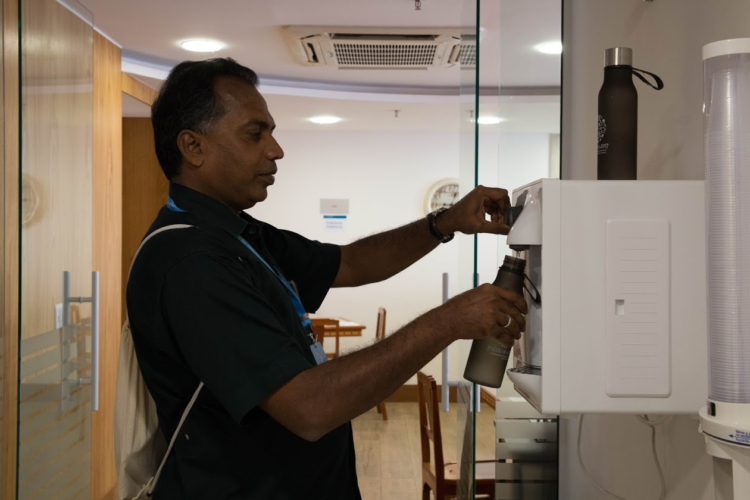 #3 Building through dialogue. Each day at the Congress there was quality time for conversation and the exchange of ideas among the Delegates.

#4 Coffee break interviews. At each break the Delegates connected via live streaming to the global education community to share their impressions of the progress of the Congress. #5. Time for action and contemplation. The Education Delegates took a pilgrimage to some symbolic places in Rio de Janeiro to reflect from a real context on the challenges for the global network.

#6. Plenary Sessions. Personal work, group work and finally work in a plenary session to share the progress that allowed the definition of the 13 actions outlined in the Action Statement. #7. The “echoes”, which contributed towards the synthesis work resulting in the definition of the 13 actions for the global network. Every day the delegates summed up the main topics in “echoes”. The last day these were written and stuck onto the map of the network. Fr. General also joined in on the last day. #8. The surprise appearance of the student choir. A choir of students from Colegio Santo Inacio surprised the Education Delegates with a live presentation of the Congress anthem “I will sing forever”. 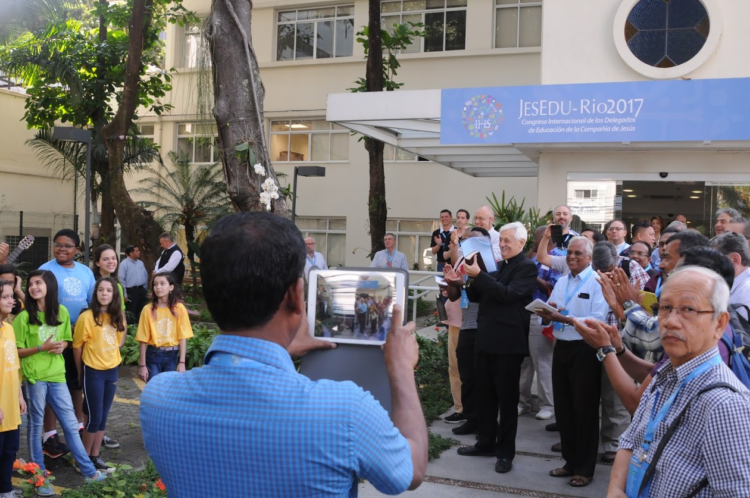 #10. The official picture. In fact it was not the official photo, but it ended up becoming the official one because it shows not only the Delegates but all those who made the Congress possible.