The recording of the II Colloquium JESEDU-Global2021 Closing Ceremony is now available!
Watch it here!
Home / Global Stories / Cannonballs and Bombshells The Ign...

Cannonballs and Bombshells: The Ignatian Legacy 500 Years after Pamplona

This story was shared in the JECSE newsletter on June 2021

20/20 means perfect vision, but we never saw this coming – this year of COVID 19. A world turned upside down. But the world has been upended many times before throughout history – be it by pandemics like the Black Death or the Spanish ‘Flu’ or by self-inflicted injuries such as the twin world wars that consumed it in the first half of the last century. It has always righted itself and we know that this too will pass.

500 years ago, on May 20th 1521, Ignatius of Loyola was badly injured at the Battle of Pamplona by a cannonball, an event that led to his convalescence and conversion from the temporal to the spiritual and a desire to dedicate the rest of his life and works Ad Maiorem Dei Gloriam. Four months earlier, in Germany, there was another bombshell in history when Martin Luther was excommunicated for refusing to recant 41 sentences drawn from his writings, an event that kick started the Reformation and significantly altered the course of world history. The reactions of the two men to their respective trials are instructive. Both were concerned to better the Church but each went about it in a different way: Luther confronted it head on while Ignatius strove to change it from within, as a ‘quiet, contagious influence’[1].

It is significant that the followers of Martin Luther called themselves Lutherans after their founder, while the companions (not followers) of Ignatius were not dubbed Ignatians. Ignatius and his companions initially called themselves the Company of Jesus: Amigos en El Señor or ‘Friends in the Lord’. So, Ignatius was a company man. All was for the Greater Glory of God and he was careful to deflect all credit from himself. Ignatius was the great organizer and spent the last sixteen years of his life, not following his own plan to be a pilgrim, but God’s plan to establish a robust organisation that would survive him and his successors.

Addressing The Loyola Institute in Dublin in 2018, Dr Alan Roxburgh observed that it is time for Christians to re-trench, reflect and re-emerge to re-engage in smaller communities. Explaining that the word ‘parish’ has its origins in the administrative structure of the Roman Empire he suggested that the way forward lies in scaling down and re-forming communities. Although he did not make an explicit reference to E.F. Schumacher’s thesis that small is beautiful, it did not require a great leap to get there.

Ignatius was also born into a (western) world in crisis with Christianity in disarray. Church and state were inextricably entwined. The Protestant Reformation did not disentangle the twain it merely realigned the Church/state alliances along political lines. However, the Reformation’s bedfellows, the Renaissance and Age of Exploration ensured that Christianity in all its forms spread around the world over the next 250 years until the seminal suppression of the Society of Jesus in 1773. Fr. Michael Sheil, Rector of Clongowes, recounts the story of Ignatius’ sojourn in the cave on the edge of Manresa

The late Leonard Cohen wrote that

… Jesus was a sailor when he walked upon the water,

And he spent a long time watching from his lonely wooden tower,

He said all men will be sailors then until the sea shall free them.

This vision of Jesus as a saviour to whom we only turn in times of need is one of many manifestations of Christ, who has never been all things to all men but has been many things to many. He was also a rebel. Born a Jew, he rebelled against the orthodoxies of his faith and replaced the God of anger with a God of love. The Jews hoped that he would lead them to freedom against their Roman overlords, but he was careful to avoid that confrontation and sought to keep church and state separate, when he urged them to ‘Render unto Caesar the things that are Caesar’s, and unto God the things that are God’s’. When he failed the Jews they handed him over to their oppressors, who were glad to put down another rebel leader, and he died for his trouble – and for us.

Ignatius was a rebel too. Like Christ, he chose to work within the system rather than to confront it, and to be that quiet, contagious influence. By adopting this approach he managed to subvert the Church of his day and lead its renovation. Ignatius also encouraged us to find God in all things. It can be difficult to find God in anything in our modern commercial world – let alone in all things – unless misfortune should befall us and – like drowning men – we see him and call clumsily for his help.

The Ignatian mission has moved on since the days of the founding fathers. We may still find God in all things but we may have to look harder these days. The dwindling resources of Jesuit manpower in the west focus the mind on the alternative methods of propagating the mission. And so it is reassuring to hear again that ‘Jesuits… find [their] identity not alone but in companionship… with the Lord, who calls’ but also ‘in companionship with others who share this call.’[2] Pierre Favre’s injunction that ‘if anything untoward does befall us, we should take it as coming not from man but from God’[3] rings very true. Fr Arrupe echoed this at La Storta when he wrote that he ‘had planned things differently; but it is God who disposes, and his designs are a mystery’.[4]

And so, 500 hundred years after the bombshell in Pamplona, as we begin to (slowly) emerge from the pandemic that has beset the world, we are excited, enthusiastic and willing to get stuck in when the new academic year comes round. We are inspired by the call ‘To live this mission in our broken world’ and look forward to being part of a ‘fraternal and joyful [community] in which [to] bring to life our creativity.’[5] Our world has been broken but – with God’s help – it will be fixed and the legacy of St Ignatius and his Amigos en El Señor will be crucial in our own renaissance.

Ignatian Camino Pilgrimage, which our Transition Year boys normally undertake at this time of year (but sadly not this year or last). 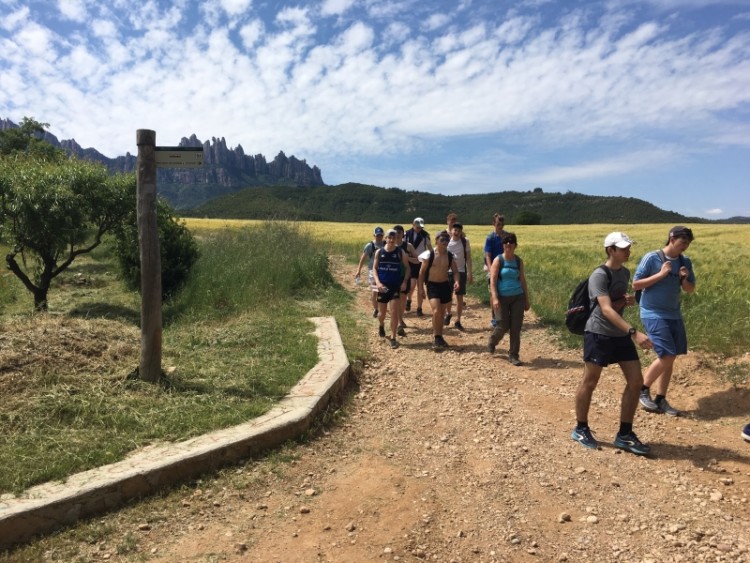 A New Global Learning Experience with Ignatian educators from around the world!