The bust of Fr Pedro Arrupe–the great missionary to Japan and the Superior General of the Society of Jesus from 1965 to 1983–is in the garden of Nagatsuka, where he was appointed as Master of Novices in 1942.

On August 6, 1945 the atomic bomb was dropped over the city of Hiroshima. Fr Arrupe was in the house, which is roughly six kilometres away from the city, far enough to survive the terrible blast but still partially damaged.  In his autobiographical volume I lived the atomic bomb, Fr Arrupe wrote: “Scarcely had the tiles, bits of glass and beams stopped falling, the crashing stopped, I got up from the ground and saw in front me the clock still hanging on the wall, but it stopped. It was 8.10.” Arrupe and his companions went to the rice fields around the house, and from there, they “saw that a thick smoke was rising in the city area and we could clearly see big flames. We went up a hill to see better and we could distinguish the place where the city used to be, because what we had in front of us was a completely devastated Hiroshima”. The novitiate became a virtual emergency room for the wounded, with Fr Arrupe treating them using his medical training. Fr General Arturo Sosa recently completed his extensive visit to three provinces in Asia: Korea, the Chinese Province, and Japan, where one of his last stops was Hiroshima.

At Elisabeth University of Music, a prestigious music school in Hiroshima established after the war by the Belgian Jesuit Fr Ernest Goossens, University President Mr Yuji Kawano received Fr General and his companions from Rome, accompanied by the Japanese Provincial Fr Renzo De Luca SJ, in the beautiful modern lobby. Upstairs, Xavier Recital Hall was packed with young and old who were eager to hear Fr General’s message. After some musical performances featuring traditional Japanese and Western instruments, Fr General spoke about the Universal Apostolic Preferences as Fr De Luca translated into Japanese. Fr General also spoke at length about Fr Arrupe, whose presence is still so palpable and relevant, someone “who developed a sensitivity not only to the problems around in the moment, but to envision the future and how to change from a problematic present to a better future”. During his whole life he lived in a certain way, expressing his preference to be free about the past and the present and to create a new life. He was able to leave his career as a doctor to join the Society. Arrupe was able to free himself of his own country, his own culture and asked to be sent to Japan. Arriving in Japan, Arrupe was very conscious that he has to change his mind and to inculturate himself in the Japanese culture.” He added, “For us, it’s emblematic what he did after the bomb here… and how he was able to try to serve the special situation in Hiroshima at that point.”

In his homily in the community chapel, Fr General spoke more about Fr Arrupe in Japan:

Here, he began to empty himself of his Western customs, to make room for those of the people to whom he was now sent. From that point came a deepening awareness and assimilation of those Japanese qualities he admired so much: the courtesy, delicacy and hospitality; the rectitude, honesty, discipline, self-control, patience and endurance; the capacity for work, sacrifice and a proven resilience to the harshness of life.”

Today the Society of Jesus embarks on another process of learning and sharing, through the Universal Apostolic Preferences. It would be curious to see how Father Arrupe, in his own way, lived them in his own time here in Japan – how he showed the way to God through the Spiritual Exercises and discernment, how he walked with the Excluded, journeyed with the youth, or cared for our Common Home. Perhaps someone will be inspired to do a study like this, discovering in Pedro Arrupe a true model for today’s mission.” 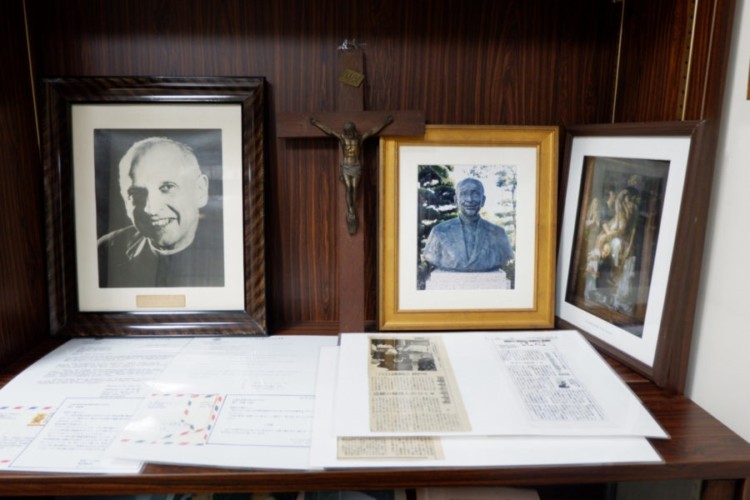