Who Do You Want To Be? A Global School Experience inviting young people to discover a path toward the fullness of life.Participate here
Home / Global Stories / LIGHT TO THE NATIONS

“LIGHT TO THE NATIONS”

a beacon of hope for the South Sudanese people

in spite of its troubled past and the present challenges.

Its students are very promising and the Jesuits hope

that they will help to shape the future of this new nation.

One November day in 1982, two Jesuits from Detroit arrived in the town of Wau in the Sudan after an overland journey of 55 driving hours from Port Sudan. The town of Wau was in the Bahr el Ghazal Province, in the western part of the then Democratic Republic of Sudan. These Jesuits, Fr. Norman Dickson, SJ and Br. Joseph Shubitowski, SJ were responding to the request of the then Bishop of Wau, Joseph Bilal Nyekindi. Bishop Nyekindi had realized the need for a Catholic Secondary School in the region because the existing secondary schools were poorly run and were hardly ever open.

Another Detroit Jesuit Fr. Keith Esenther, SJ was working at St. Paul’s Major Seminary from 1977-1979 in the village of Bussere which is seven miles west of Wau. He observed that the main Secondary School in Wau at that time (Bussere Senior Secondary School), which was near the Catholic Mission at Bussere and St. Paul’s Major Seminary, was open for no more than two to three months in those three years. Fr. Esenther continued to observe that most of the seminarians whom he was teaching had no interest in becoming priests but they were after getting an education. He felt that these seminarians could be given an option of getting a decent education without them being forced to join the seminary. To help solve this problem he proposed to Bishop Nyekindi to start a good secondary school in the area.

Thus, Bishop Nyekindi and the Provincial of the Jesuits in Detroit Fr. Michael J. Lavelle, SJ began a collaboration to start a model school that would help educate the people of Wau. This school would also serve as a good example of sound education for the then existing schools. The school came to be known as Loyola Secondary School, Wau with the motto: “Light to the Nations”.

The first challenge the Jesuits faced when they arrived in Wau in early 1982 to start Loyola Secondary School was building the school. The area was isolated, without proper road transport, insecure and with few basic materials for building. Almost all the materials had to be imported from the neighboring countries and from abroad. This made the beginnings so tedious. Br. Shubitowski, who was an experienced builder, and Fr. Dickson, who was the first director of the school, were among the first to arrive. They spent a lot of time planning, coordinating the building work and designing the curriculum. Other American Jesuits joined the mission in 1983 when the school opened its doors to Sudanese students.

Meanwhile, the second Sudanese civil war, the infamous Anya-Nya II, which began in 1983, was underway. Anya-Nya means poison concocted from venom of a river snake and rotten beans. This is according to the local Madi people. Anya Nya II was a war between the North Sudanese people who are of Arabic origin and are mainly Muslims against the Africans of Nilotic origin in the South who are mainly Christians.

The morning prayer at the beginning of the lessons.

Girls during the Eucharistic celebration. The joy of the winner.

The war was sparked by the enactment of what came to be known as the September Laws by the Islamic President Major General Gaafar Muhammad Nimeiri. These laws re-divided the South creating three regions: Upper Nile, Bahr el Ghazal and Equatoria and destroyed the 1972 self-government for the South that had been enacted in Addis Ababa. The September Laws also sanctioned the use of physical punishment, hudud, which included: flogging, amputation, stoning and execution for minor crimes. The September Laws also prohibited the sale of alcohol and the collection of interest on debts. This was essentially an imposition of Sharia Law on the whole country. The September Laws were part of Nimeiri’s continued project of “Islamizing” and “Arabising” the whole of the Sudan even though the South was predominantly Christian. These laws were oppressive to the southern Christians who decided to rebel.

Thus, because of Anya-Nya II, the school functioned only for four years, before it was taken up by the Khartoum army and used as a military barracks for over twenty years. Efforts to reopen the school in 1986 were dashed. Fr. James O’Reilly, SJ who stayed on in the school as part of the caretaker team after its occupation by the military commented: “Will Loyola open again as a Senior Secondary School? The soldiers occupying the school and a couple high officers smile, saying no. But… time will tell”.

With the intensification of war, the education system in the South of Sudan which was already flimsy was totally destroyed. Most of the Southerners fled the country into refugee camps in neighboring countries such as Kenya and Ethiopia. Others went to Khartoum, in North Sudan, where they found a temporary haven amidst the injustices there. It was hoped that the Loyola Secondary School would be opened after a few years but that hope was dashed when the war continued.

Thus, for over twenty years, the school was shut down. In the meantime, the soldiers who were using the school as a barracks kept on destroying it. Several heroic Jesuits stayed on during that time to safeguard the property as much as they could and also to help the displaced people around Wau. Fr. Dick Cherry, SJ who was one of those holding the fort at Loyola at that time recounted his ordeal of being tied up overnight by some soldiers after he denied their request of using the school borehole freely.

Several attempts were made to reopen the school in the 1990s but that was not possible. Luckily, the civil war in the Sudan ended with the signing of the Comprehensive Peace Agreement (CPA) between the government of North Sudan and the South Sudanese people in the town of Machakos, Kenya in the 2005. Thus, 2005 marked the end of Anya-Nya II. The next year, 2006, the Jesuits went back to Loyola Secondary School. Their first task was to persuade the military to leave the school. Then, the buildings had to be renovated and made ready for use. Br. Joseph Shubitowski, SJ who was the original builder of the school spent one and a half years renovating the school and the Jesuit residence. The building had been severely damaged by almost twenty years of occupation by the military.

Other Jesuits came gradually to the mission between 2006 and 2009. They began thinking of ways of reopening the school and also how to make an impact on the local church through pastoral ministries beyond teaching at Loyola Secondary School. In April 2008, the school opened its doors again! In the 1980s the school was only for boys because girls were not allowed to venture out of their homesteads. However, in 2008, the Jesuits made the school coed because of the increasing need of educating the girl child in the South of Sudan. At the reopening of the school, a group of local Jesuits from the Eastern Africa Jesuit Province took charge of the day to day running of the school. However, the Detroit Jesuits continued to be involved in the school.

In 2011, the first group of students after the re-establishment of Loyola Secondary School did their Sudan Secondary School Certificate Examinations. They produced an impressive result which made the school to be popular among the citizens of South Sudan. The same year the Southern Sudan got its independence from Sudan, and a new country called Republic of South Sudan (ROSS) was born.

A seller of water in a village near the school.

Loyola Secondary School is composed of students from the various ethnic communities and religious affiliations found in South Sudan. This places the school in a good position of inculcating the value of multiculturalism to its students. This has helped the Jesuits to foster reconciliation among the aggrieved ethnic communities whom they serve. This is part of the contribution the Jesuits are making to develop a culture of peace in the country.

The school also serves the community around it. A youth center known as Loyola Youth Center has been established in order to help young people come together and participate in activities that are valuable which can help transform a society broken by war. Activities at the Loyola Youth Center include teaching catechism to the children from the neighborhood, singing and dancing, football, volleyball games, etc. 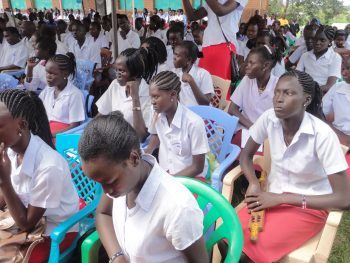 Photos showing aspects of scholastic life: during the lessons.

The school continues to grow although it is faced by manifold challenges. Currently it can accommodate four hundred students, but the vision that the Jesuits, parents, teachers and the local church have is to accommodate one thousand students. This is a mammoth task because building a new infrastructure in this part of the world is still difficult just like in the 1980s. This is because the region is still inaccessible by road yet most of the building materials must be bought from outside the country. Also, to get the funds for the development projects in the school has continued to be an uphill task. The school lacks proper laboratories and sports facilities. It is our hope that these facilities will come with time, at the moment the teachers and the students improvise and make good use of the materials that are available.

Lack of enough qualified teachers is also another setback. According to the UN, only 3% of teachers in South Sudan are trained. This is the reason why the Jesuits in collaboration with the local church are thinking about opening a Teachers Training College in the area. Implementing the new South Sudan curriculum, which uses English as a medium of instruction, is a challenge because the few teachers available were trained in the old syllabus developed in Khartoum, North Sudan. This Khartoum syllabus was conducted in Arabic and emphasized Islamic values. Thus, it will take a long time to undo the “Arabisation” that took place for almost a century in South Sudan. The presence of the military recalls the lack of security in this country only recently independent.

Another challenge that the Jesuits face is insecurity which is caused by inter-ethnic violence and the easy access to small arms. A new civil war began in December 2013 causing fear among the people that the good work at Loyola Secondary School will be interrupted. Luckily, the war did not affect the town of Wau and thus the Jesuits continued their work uninterrupted. Even though war was continuing in other parts of the country studies continued normally at Loyola Secondary School in 2014. The students continued to take their studies seriously. Their smiles and laughter were a clear demonstration that they were full of hope. Their future was not going to be bleak.

Loyola Secondary School, Wau continues to be a beacon of hope for the South Sudanese people in spite of its troubled past and the present challenges. Its students are very promising and the Jesuits hope that they will help to shape the future of this new nation. The parents are proud to have their children in the school. They appreciate the kind of valuable education that the Jesuits try to impart in their children.