Who Do You Want To Be? A Global School Experience inviting young people to discover a path toward the fullness of life.Participate here
Home / Global Stories / Angels Marking Years Since Trage...

By Mike Benigno
Dec 16th, 2015
Share
News from the Networks

December 10, 2015 — Today marks exactly 10 years since a tragedy of immense proportion struck the Loyola Jesuit College Community in Nigeria, an event that changed the lives of dozens of families that were preparing to celebrate Christmas.

Flying in adverse weather — windshear, rain and lightning — Sosoliso Airlines Flight 1145, which was carrying 110 people on board including 61 Loyola Jesuit College students (10% of the student population), crashed during a failed landing attempt at Port Harcourt International Airport. The plane collided with a concrete drainage culvert and exploded instantly; fires burned for hours due to the poor state of emergency response strategies at the airport and lack of water to extinguish the burning plane.

The students had previously traveled between the Jesuit school and their homes by buses, but rising crime along the roads made the seven-hour trip too dangerous. Some on board were in the 7th grade, while others were in their last year of high school. Naturally, they were all happy to go home to celebrate Christmas, and their families were waiting at the airport to receive them. But instead of a welcome, the families and the entire school community embarked together on a long journey of grief, healing and hope.

“From whatever sphere you looked at it, it was devastating,” Fr. Emmanuel Ugwejeh, SJ, president of Loyola Jesuit College, wrote recently in a poignant article published in Nigeria’s LEADERSHIP newspaper. “The crash caused despair in many hearts. But there was also a determination to ensure that evil did not triumph; that something good came out of a dreadful event.”

Of the 110 people on board, there were two survivors, including Loyola Jesuit College student Kechi Okwuchi, who was 16 at the time. Okwuchi would emerge as a figure of hope and support throughout the next decade as families and school officials met with President Olusegun Obasanjo; protesters took to Lagos and Abuja demanding reform in the aviation and the health care systems; and so many others mourned the loss of the 60 children.

As the plans for the 10th memorial anniversary of the 60 students were underway earlier this year, one of Fr. Ugwejeh’s students sought to ascertain what changes in the aviation industry had taken place to prevent such tragedies from happening again. That student teamed with the Concerned Students Club — a club formed by students following the crash to reflect on the issues that affect the nation — to look for answers.

The students interviewed various public officials at the Federal Airport Authority of Nigeria and the Fire Service and other related agencies, inviting several officials to sign an oath stating that they remained committed to ensuring that, under their watch, everything possible will be done to safeguard the life of every citizen and every person that would use airline services. Several officials signed the oath, promising that they would always do their jobs well to their best abilities. 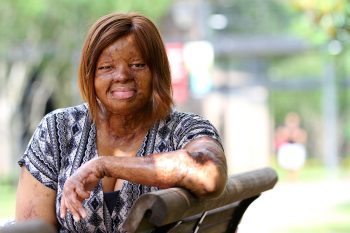 Given their innocence, Loyola Jesuit College students refer to the 60 students who died in the crash as Our 60 Angels. Over the years, despite periods of struggle and adversity, several major developments have taken place that will preserve the memory and the dreams of those lost. Most notable was the founding of Jesuit Memorial College, which opened its gates to students on Oct. 17, 2013, and Loyola Academy, a tuition free primary school, which opened a year later. “The message is simple,” wrote Fr. Ugwejeh. “While the crash brought despair to many hearts, the establishment of [the schools] has brought hope that…something good will come out of a horrible experience.”

The motto for the new college is, appropriately, “Hope Reborn,” one that expresses the hope that those who experience Jesuit education at the new schools will carry out the dreams of the 60 Angels of making Nigeria a better country.

Additionally, at Loyola Jesuit College itself, the generosity of parents and benefactors helped build Memorial Hall, and a fundraising drive spurred by the Parent-Teacher Association enabled the school to begin building five blocks of residences for the College staff.

This evening, on Dec. 10, 2015, the Loyola Jesuit College community will take part in a candlelight procession, a tradition that has become an annual one since the crash. But this year, the procession will take place at Port Harcourt International Airport and will also include the unveiling of a monument that will be placed on the campus of Jesuit Memorial College and the laying of the foundation stone for the boys’ residence at the school. Those gathered will also celebrate the miraculous survival and resilience of Kechi Okwuchi, who is expected to attend. She has undergone more than 75 surgeries and graduated from the University of St. Thomas in Texas seven months ago.

“The Nigerian students at Loyola Jesuit College, from my five years there, are a noble people who understand the importance of honoring their dead and keeping alive the memory of those they have known and loved,” said Fr. Marc Roselli, SJ, who was principal of the school in 2005. “They draw their strength and inspiration from those who have died, and I know that the impact of the tragedy will bring about many changes for a better Nigeria.”

To read the commencement address Kechi Okwuchi delivered to her classmates at the University of St. Thomas in May 2015, click here.

This article is republished with the permission of the author. It was originally published on the Jesuits USA Northeast Province Website.